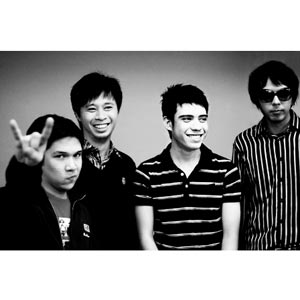 Jayson Fernandez (third from left) was greeted with cheers and a standing ovation after he won during the grand finals night of Rivermaya: Bagong Liwanag (The Audition Specials) last October 24 at the Music Museum. The band's resident members (L-R) drummer Mark Escueta, guitarist Mike Elgar, and bassist Japs Sergio will perform with the 18-year old Bicolano from now on.


The Rivermaya band is now complete as they welcome their newest vocalist, Jayson Fernandez. The 18-year-old Bicolano won over fellow finalist Hans Dimayuga during the grand finals of the search for the band's new member called Bagong Liwanag. The competition was held last October 24 at the Music Museum in San Juan City.


The finals night looked like a showdown between the two remaining finalists, Jayson and Hans. The former did a very good rendition of the Rivermaya classic "Himala" while the latter showed off his own composition, which garnered the most number of text votes and got the judges' approval for best original song.

However, it was Jayson who really got the nod of the panel of judges—composed of The Dawn's guitarist and NU 107 In the Raw host Francis Reyes, Razorback's bassist Louie Talan, and Rivermaya's co-manager, Lizza Nakpil. "It was as if he was asking the whole world for a miracle to make his dream come true," commented Francis after Jayson sang "Himala."

When it was already time to give the final decision, Jayson dropped to the floor as Lizza announced, "I'm going for a leap of faith so, Jayson, we love you! Welcome to Rivermaya!" Jayson later on explained that he wanted to jump for joy, "pero nanginig ang tuhod ko at napaupo na lang ako."


Rivermaya's drummer Mark Escueta, guitarist Mike Elgar, and bassist Japs Sergio rushed on stage to help him to his feet and welcome him as the newest member of the so-called "Banda ng Bayan."

Jayson then had his first performance with his new band mates when he sang another Rivermaya classic titled "Awit ng Kabataan." While singing, the audience greeted him with wild cheers and a standing ovation. In the middle of the song, Jayson excitedly told the crowd, "Salamat sa inyong lahat. Dati pinapanuod ko lang sila, tinitignan sila sa litrato, ngayon kasama ko na sila!"

The native of Bicol beat 13 finalists who were chosen among the 500 aspirants who came during the two-day auditions at the University of the Philippines-Diliman campus two months ago. Jayson also revealed that his mother, who is a fan of the Juan dela Cruz band, taught his first song performance "Balong Malalim."
Read Next
Read More Stories About
Rivermaya, Mark Escueta, Japs Sergio, music
Post a Comment
Featured
Latest Stories
Trending in Summit Media Network