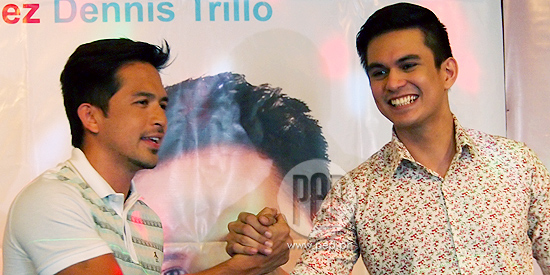 The onscreen romance of Tom Rodriguez (right) and Dennis Trillo, popularly known as the “TomDen” loveteam of GMA-7's now defunct My Husband’s Lover, did not quite end with the teleserye and an elaborately produced concert. The tandem carries over their sweetness to their record, TomDen, an 8-track collection of ballads that includes HML's theme songs, One More Try and

Produced by GMA Records, the TomDen album is a collection of eight ballads that convey the love story of Vincent and Eric. The actors, who are gifted with good singing voices, manage to be in character while recording the songs, making the album a solid treat to fans.

At the album launch on Wednesday noon, October 30, Dennis expressed his elation for the continued support given by fans.

Tom, on the other hand, admitted that the success still feels “surreal,” especially with the launching of an album.

The eight songs include the tandem’s version of the teleserye’s theme song, One More Try, as well as Forever, an OPM classic written by Louie Ocampo and Martin Nievera.

The other ballads include Ikaw Ang Sagot, Photograph, and Hey It’s Me, recorded solo by Tom.

Tom said his background in theater helped him complete this project to everyone's satisfaction.

Dennis, meanwhile, displays his versatility by shifting from singing rock songs with his band to crooning sentimental ballads. The album contains his solo recording of the songs Stay, Kailan Man and It’s Over Now.


A day after TomDen the album was made available on digital format, it debuted in the 9th slot on iTunes Philippines’ Top Albums chart, based on full album downloads. The following day, it already topped the chart. This took place just days before its grand launch on Sunday All Stars last October 20.