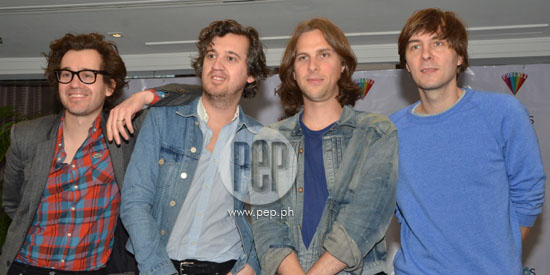 It took some time but Grammy award-winning band Phoenix finally made its way to the Philippines for a one-night only concert at the World Trade Center, Pasay City on January 21.

A press conference was held on January 20 at the Diamond Hotel, Pasay City upon the group's arrival from the airport. This is the band’s first time in the Philippines.


Lead singer Thomas expressed his excitement over the chance to finally meet their Filipino fans. He said, “We feel very welcomed so we’re very happy to be here.”

When asked what took them so long to visit the Philippines, Thomas answered, “I don’t know but we’re very happy that they… you know, we have five albums now. The [Filipino] people never saw us and it’s very… we have come prepared."

Phoenix has been performing from one country to the next but the band members say that they don’t get homesick even though the tour is just halfway done. Thomas said, “Not a lot of things because what’s nice about Versailles it will always be the same, you know. It’s a boring city and will never change. So, it’s nice that’s our hometown. You can always go back to it and it will always be exactly the same."

He continued, “What do we miss? The gardens maybe, they’re very nice. The Gardens of Versailles, that would be one thing.”

PHOENIX WORLD TOUR. Thomas couldn't pinpoint exactly what Filipinos could look forward to during the concert. But this may be a good thing because everything will be a surprise for Phoenix fans.

Branco quipped, “We don’t know but we’ve been practicing for twelve years [for this].”

Thomas then added, “I think that’s the only thing that we argue about is the setlist. We don’t know what were gonna play.

“It’s the only thing that change and ten minutes before the show, we don’t know what it’s gonna be.

“But we like playing the new songs a lot, which is nice because otherwise, we’ll be in big trouble.”

While singing their songs in English, members of Phoenix have noticeable French accents that sometimes hinder fans from hearing the lyrics correctly. Although this happens often, the band members don’t mind the fans singing the wrong lyrics. In fact, the band encouraged their Filipino fans to sing along with them during the concert.

Thomas pointed out, “No, it’s fun. But they do this very often—singing the wrong lyrics—everywhere. It’s not only one country at all. We like misunderstandings. We embrace them.”

He added, “We encourage them because they don’t sing [along] in France. Perhaps, that’s the best compliment you can do if people can sing along the lyrics.

“And it’s a rare thing when it comes to our music because the lyrics are very strange and they sing along so it makes it even better.”

The singer even recalled a funny anecdote involving a fan singing the wrong lyrics for their song titled “If I Ever Feel Better.”


Thomas narrated, “There’s one line says ‘[feels] like I’ve been buried’ and one guy thought it was ‘barbarius’ so, it doesn’t even exist, not even a word but he thought it’s ‘barbarius.’”

Among their concerts so far, Branco considers their concert in Mexico as one of their most memorable visits because of the “general aura” of the crowd.

Members of the press also asked the band how they felt now that they are headlining their own shows in big locations after playing in more intimate venues. Christian said in jest, “We really enjoy both. We don’t like [medium-sized venues].”

“We travel around the world, in some parts, we are a very little band.

“And we really enjoy the fact that it’s continuously different [city]. We love it.

“If we would be just in France, we would travel the same cities again and the fanbase, it would be very boring. We are happy with this rollercoaster of emotions.”

THE COMEBACK PRESSURE. The release of the album Bankrupt marks the return of Phoenix to the recording scene. Release in April 2013, Bankrupt comes four years after the band's Grammy Best Alternative Music Album award success in 2009 for Wolfgang Amadeus Phoenix.

Christian said that winning a Grammy award for Wolfgang Amadeus Phoenix made an impact on them during the production of their fifth album.

The band guitarist added that the band’s goal is to create good music since their inception in 1999. He recalled, “Our goal was to do write good songs and to write them with no compromises. And success is helping us to do this even now. That’s our goal—to keep on doing this to further direction.”

Having more than enough time to produce their latest album, members of the press asked the band how they improved since releasing their last album.

Thomas answered, “I don’t think we grew up that much.” However, the band vocalist made sure that they will offer their fans a different sound compared to their past albums. He continued, “And also there’s one thing that makes us not really grow up is that each time we set up a few rules in making album. We try to change them.

“We don’t want to follow the same recipes. We try to change them [and] it takes time. We don’t really learn so much. We destroy the previous rules we make and you know, it would be fun.

“Each time, it’s the same story but I know that we try to be different, pretty much.”

Phoenix fans might be wondering why the band did not include any French songs in the latest album. Branco explained, “We tried but it never [gets included].”

The 40-year-old band guitarist revealed, “We try, we try [to include songs in French]. Every album, we try but we fail.”

Thomas said, “We won’t reveal our new tricks. It’s like magic, if you see a magic trick, it loses its [charm]. You should never reveal it. Sorry.”

ON FREDDIE AGUILAR. The band's guitarist, Laurent "Branco" Brancowitz, considers OPM icon Freddie Aguilar as one of his musical influences.

During the press conference, Branco revealed that he owns records of Freddie Aguilar’s music, which is why he is familiar with the Pinoy folk singer.


“The truth is that I said that I had records of him. We have a lot of records. We had them when we were kids… So, we had lots of records and during one interview, I said, ‘I had a record of this guy and I really loved the [album] cover.

“A guy with the long hair, dark shades. He looked really cool. We love music and good music is very rare so we try to find them everywhere.

“Usually we are attracted by the cover and one song in the sharp, so ‘shazam’ it. I mean, I don’t know very well his career but I know I have a few records and they were good.”

Phoenix Live in Manila is made possible by Karpos Multimedia. Tickets are on sale at all SM Ticket outlets or they can be purchased online through the SM Tickets website. Tickets are priced at P5000 for VIP Seated and P3500 for Gold Standing.