Ryan Cayabyab hones the singing talents of the RCS 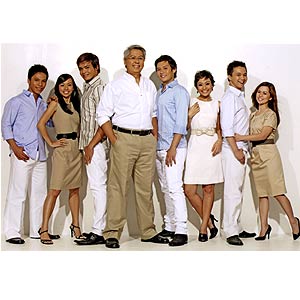 It will be recalled that the world-renowned Filipino composer formed successful vocal groups such as the Smokey Mountain, 14K, and The San Miguel Master Chorale (SMMC). Smokey Mountain trained the likes of Geneva Cruz and Jeffrey Hidalgo while 14K paved the way for the showbiz career of Jolina Magdangal. The SMMC, on the other hand, was considered as one of the premier choral groups in the country during its time.

"I woke up one morning and said I want a new group," narrated the Maestro during the November 26 media launch at the Holiday Inn, Ortigas Center.


Mr. C, as he is more popularly called, explained his reasons for forming the RCS. "Naghahananap ako ng outlet for my new songs and I said, ‘It's been a long time since I had my own group, a Ryan Cayabyab type of group.' So I said, I think in just two or three weeks, I announced this [audition] and then, they came. Word of mouth yun, e, because many of these people really come from...there's a network and they know about performing and they came."

Mr. C initially had 170 aspirants during the first auditions held during the last week of June. "Then, I let go of a lot of them. Forty people came the next Sunday, again for auditions, until I came up with seven," recounted Maestro.

SEVEN UNIQUE TALENTS. When Mr. Cayabyab called for the auditions, the music maestro did not specify criteria to be used in determining who will make the final cut. He even asked the seven members of the RCS to refresh his memory regarding the elimination process."Criteria? What did I tell you? They come in set, 10 each, they all come in and then they sing one at a time. Then, what did I tell you?"

The outcome? Mr. Cayabyab came up with a group composed of diverse individuals, each offering their own unique talents.

"As a matter of fact, I didn't want all of them to be the same. I was looking for unique and strategic voices. It's like this, no two of them are alike in a way, iba-iba, because I wanted to create a group na talagang iba-iba sila," explained Mr. C.

How would the Maestro describe the RCS?

Mr. Cayabyab detailed the qualities of his handpicked singers. He said, "What do I remember? I think Irra, he had the most... pagpasok pa lang... ‘Boom! Okay, pasok na 'to agad.' Yung mga ganun, yung malakas ang dating.

"Kyla has not only the voice [but she's also] a great dancer. I've never seen anyone audition na talagang she had the moves. She is the resident designer, she designs, and mixes and matches the clothes.

"Then this guy [Vincent], the transformation is great. ‘O, hindi ko 'to kukunin kasi mukha siyang tatang. But through the audition process, maganda yung boses niya. Sabi ko, ‘Ibang klase.' I got this guy kasi very formidable ang musical training niya so I said, ‘Vincent, you'll be the one to vocalize them to make sure their notes are okay.'"

PLANS OF GOING SOLO. Just like any other group, whether a vocal or a band, there is always the threat of disbandment. Is it conceivable for the members to break away from the RCS and pursue their own careers?

Irra, who spoke for the group, said, "We just started and, you know, with our background with working with people, we feel like we are one team, we are one collective person in a way. The more we work together, the more we represent like one team, one RCS, one team that would represent Mr. Cayabyab."

He then added, "As for going solo, I don't think anyone of us is actually planning to go solo because this group is very dynamic and we love what we're doing. We just love singing and we love making music together."

Right now, Mr. Cayabyab is still in the process of lining up projects for his new baby. He told PEP (Philippine Entertainment Portal) that there are plans for the group to perform abroad but he cannot divulge them yet since the details are not yet finalized.

The RCS was made a television appearance in ABS-CBN's noontime variety show ASAP last Sunday, December 2. The seven-strong singing group performed "Let Me Love You Tonight," the first single of their 14-track self-titled debut album.