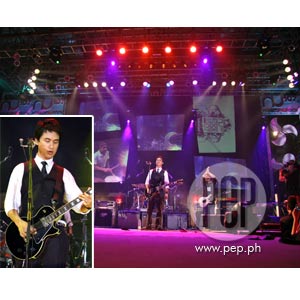 On familiar ground: Ely Buendia (inset) led his band, Pupil, in performing their current single "Sala" taken from their second album, Wildlife. Ely was one of the performers last November 30 at the 2007 NU Rock Awards. Unknown to many, the core members of the legendary band Eraserheads were all in attendance that evening although they were seated at different tables.

The climactic ending was a fitting salute to a band that has achieved commercial success while staying loyal to their artistic vision. Gathering six out of the 15 awards, Bamboo proved that they are this year's best among the lot of diverse acts that rocked the scene in 2007.

SINOSIKAT IS NOW SIKAT. But while Bamboo's triumph was an expected scenario, this year's edition of the rock awards was also full of surprises, particularly in the Vocalist of the Year category. Sinosikat's soulful front woman Kat Agarrado bagged the coveted individual award, affirming her reputation as one of the most promising vocalists to emerge from the local underground to mainstream consciousness.

Winning the title was certainly far from easy. This year, Kat was pitted against the likes of Marc Abaya of Kjwan, Sugarfree's Ebe Dancel, Miggy Chavez of Chicosci, Steve Badiola of emo darlings Typecast and Bamboo Mañalac. Most people inside the venue and fellow artists agreed with the outcome and applauded Kat louldy as she went up the stage to accept the plum.

Best New Artist aptly went to the punk trio of Hilera. Typecast also pulled off their own surprise by notching the Song of the Year award through the single, "Will You Ever Learn," beating other favorites like Bamboo's "Tatsulok," "Sundo" by Imago and Sinosikat's "Turning My Safety Off."

The Hall of Fame Award for 2007 goes to brothers Angelo and Mike Villegas of the ‘90s pop-rock duo, Rizal Underground. Although they disbanded a long time ago, the duo remains active in the music scene by composing songs or doing guitar sessions for other artists.

SIDE DRAMA. Despite their status as a non-functioning unit, Orange & Lemons still managed to hoist a last hurrah as the band clinched the prestigious Album of the Year award for the psychedelic-pop infused record, Moonlane Gardens. Animosity between the members, however, was still evident as only guitarist-vocalist Clem de Castro claimed the award in behalf of his estranged band mates. Mcoy Fundales, the band's former vocalist, was there at the venue but did not join Clem in accepting the award. It will remembered that Mcoy had just gotten out of the Pinoy Big Brother house where he stayed as one of the celebrity housemates.

The award for Best Album Packaging was also bestowed to Moonlane Gardens, with Clem and graphic artist Sarah Gaugler sharing the credits.

As usual, action and drama in this year's event went beyond the stage. The NU Rock Awards paved the way for the four members of the legendary Eraserheads to stay under one roof, although Ely Buendia, Raimund Marasigan, Marcus Adoro, and Buddy Zabala never shared a table that night.

"That is big news," exclaimed Rivermaya manager Lizza Nakpil, citing the fact that the four ex-Eheads are rarely seen gathered in one venue after their controversial split up in 2002.

Who knows? Maybe a reunion will finally take place on the 15th anniversary of the rock awards.

Here is the complete list of winners during the 2007 NU 107 Rock Awards:

Guitarist of the Year: Ira Cruz of Bamboo

Bassist of the Year: Nathan Azarcon of Bamboo

Drummer of the Year: Vic Mercado of Bamboo and Mark Escueta of Rivermaya

In the Raw Award: Reklamo

Song of the Year: "Will You Ever Learn" by Typecast

Album of the Year: Moonlane Gardens by Orange & Lemons

Artist of the Year: Bamboo