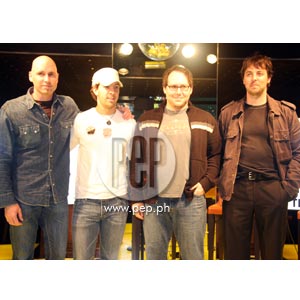 The American acoustic rock band arrived in the country for their Araneta Coliseum concert tonight, December 7. Vertical Horizon will perform with Rivermaya while a special segment will feature American actor and stand-up comedian Jamie Kennedy (host of the gag show The Jamie Kennedy Experiment).

Before the members of Vertical Horizon were introduced, there was a quick Q&A with the band Rivermaya. The said concert will be their first major performance with their newest member, Jayson Fernandez.

The members of "Ang Banda ng Bayan" said they couldn't believe their manager, Lizza Nakpil, when she broke the news that they will be performing with the foreign group Vertical Horizon. "Akala ko nga nagjo-joke siya," said Rivermaya guitarist, Mike Elgar.

The band's vocalist Jayson is particularly excited to perform with the Vertical Horizon concert because he is a huge fan of the band. In fact, he used to play Vertical Horizon songs when he was still a member of an acoustic band. The 18-year old native of Manguisoc, Camarines Norte, won the Bagong Liwanag auditions aired on Studio 23 last October.

Vertical Horizon popularized the hit songs like "Everything You Want," "You're A God," and "Best I Ever Had." The group was founded by Georgetown University (Washington D.C.) schoolmates Matthew Scannell and Keith Kane in 1990. The band released three self-produced albums before signing up with Sony BMG/RCA Records.


In 2000, Billboard honored them as one of the Adult Top 40 Artists of the year since their song "Everything You Want" hit the top of their Hot 100 and Adult Top 40 singles charts. The band ended their relationship with RCA in 2004 and opted to sign a new deal with Hybrid Recordings.

Matt Scannel, Vertical Horizon's vocalist, is also excited about performing for Filipinos during their concert tonight. "[We're] thrilled. I can't wait for it, you know. Everybody seems so nice to us. It's so welcoming. It's so thrilling to be here, totally honest. And I look forward to a good show."

When he was informed about Jayson's admiration for their band, Matt reacted, "I wasn't aware of that but I might be his biggest fan so it will be good."

Watch Vertical Horizon and Rivermaya as they rock the Araneta Coliseum tonight at 7 p.m. with the special participation of American standup comedian Jamie Kennedy.