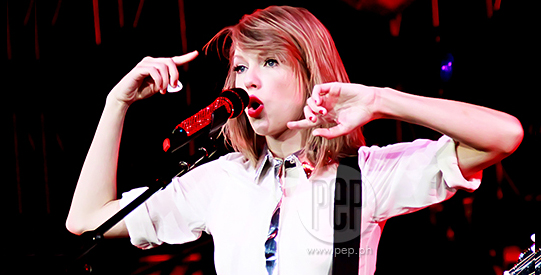 Taylor Swift twirls her hair and gives a wink to the crowd before ending The Red Tour in Manila. The singer candidly talked about life and love during her one-night concert in the Philippines.

The Taylor Swift: The Red Tour concert in Manila could have been a fairytale story unveiling live in front of our eyes.

Taylor’s heartfelt lyrics combined with the grand stage set-up, her exquisite wardrobe and even her spiels allowed her to connect more with Swifties (the name given to her fans). The Manila leg of the Red Tour offered superb productions that are unlikely to be forgotten by fans for a long time.

By pouring her emotions into her songwriting and displaying her honesty in every track, Taylor has come up with compositions that not only reflect her own journey but mirror the struggles faced by other young people like her. She’s like the girl-next-door who talks about her life, love, family, and everything in between.


Taylor’s an open book through her music.

MANILA TURNS "BRIGHT BURNING RED." At the start of the concert, Taylor Swift told her Filipino fans: “I think you and I will be on the same page when I say, if I had to choose one color to represent all those emotions that go in to falling in love and having your heart broken, the color that I will choose Manila will be bright burning RED.”

The 24-year-old singer then came out onstage wearing a white polo with silver trimming paired with black highwaisted shorts and a fedora hat.


Using her glittering red microphone, she kicked off her concert by singing “State of Grace” followed by “Holy Ground.” She danced alongside her crew wearing an all-red ensemble that matched her red sneakers. After greeting her Manila audience, Taylor strummed her red electric guitar to perform her title track “Red.”

“And I guess I'm just thinking out loud here.”


She talked to audience members like they were long time friends chatting on the phone during the night of a major break-up.

The pop-country singer also gave advice to those going through the same thing, “Who we become is all...a lot of it is determined on what happens to us in our lives, in our past, and how we choose to handle what happens to us. So much in life is out of our control and we’re absolutely terrified and mystified by the fact that we have no control over our circumstances sometimes.

“But we have complete control over how we handle our circumstance,” she emphasized.

MAGICAL "22." Manila fans caught a glimpse of Taylor's kiddie side as she peeked through her Christmas presents during an AVP that was shown on the big screen. Her concert also allowed the American singer-songwriter to showcase her skills in playing the guitar as well as playing the piano.


Taylor was 22 years old when she released her fourth studio album RED in 2012.


Now already 24 years old, Taylor is still “feeling 22” as she sings the song for the first time in front of her Manila Swifties.

Taylor describes “22” as the age when we embrace the uncertainty, it’s when we feel “happy, free, confused, and lonely at the same time,” that it’s both “miserable and magical.”

Looking like a character straight from High School Musical, Taylor wore a red t-shirt with the word "Manila" while dancing with her crew to perform a bubbly execution of “22.” She sang an acoustic rendition of “Fearless” and “You Belong With Me” afterwards.

TAYLOR FULFILLS PROMISE TO PINOYS. Swifties, who were singing along her songs the entire time, again provided the lyrics to “Sparks Fly” while Taylor went downstage to shake hands with lucky audience members.

“This is my second time playing a show in Manila!” she said as she reminisced about her 2011 concert in the Philippines.

“Well I say to you, and I say to the people who saw the show a few years ago, mahal kita Manila!”

But “Mahal kita” isn’t the only Tagalog sentence she learned. Throughout the concert, she kept on saying Tagalog words such as “magandang gabi,” “mabuhay,” "maraming salamat," and “mahal ko kayo,” whenever she can.

Wearing a red low neckline top paired with a white skirt, she held her banjo as she gushed: “Manila, you know, we really love you.”

She even talked about the gifts she received from Filipino Swifties, “You are so giving, and so kind, and so creative. I have a lot of people who send me gifts from Manila, from the Philippines. And they're really the most creative, beautiful, thoughtful gifts you could imagine, and I wanted to thank you for that.”


Aside from talking about love, Taylor also spoke about fitting in and finding true friends.

“I think one thing I learned about life is that it's very rare to find people who you think you belong with. You know a lot of you have probably experience this, when you go through life and you feel that you don't always fit in, you don't always feel like you belong.


She then went on to sing “Mean” with lyrics that go: You, with your words like knives / And swords and weapons that you use against me..."

STORYBOOK ENDING. During one particular skit, Taylor looked every bit a Hollywood star as journalists and photographers followed her around on stage. The “60’s queen” performed “The Lucky One,” a song about how fame and fortune won't exactly lead you to happiness.

When she performed “I Knew You Were Trouble,” she shifted from wearing a white glittery gown into a black and gold ensemble. Set in a masquerade ball, the song gets a classic rock touch with a short dance break near the end.

Afterwards, Taylor channeled the star-crossed character Juliet by wearing a gold dress that made her look fit as royalty. When she performed “Love Story,” it seemed as if this was her last song for the night, but she suddenly came out once more for an encore performance.

Dressed as a circus ring master, she sang “We Are Never Ever Getting Back Together” while the whole stage was decorated like a scene from Alice in Wonderland.

The presence of ballerinas and violinists also added to the vibe of Victorian royalty.

The theatrical performances made the Red concert so much more memorable. Taylor’s animated expressions and the overall set design added a new dimension to her songs, such that every track felt like another chapter uncovering the world of Taylor Swift.