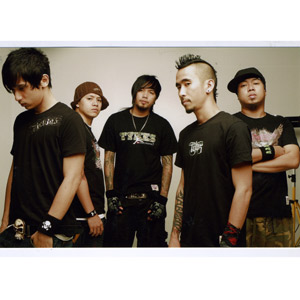 A greatest hits album can draw out a lot of connotations: a) dried out ideas due to gamut of pressures thus necessitating a compilation of previous recordings to keep the fans tied up until new materials come along; b) strained relationship among members, and c) the closing of a chapter and the unveiling of a new one.

The country's premiere rap-metal band, Slapshock, emphasizes that they fall into the third category.

"We're moving on to the next phase while at the same time celebrating the band's ten years of existence," explained bassist Lee Nadela.

Frontman Jamir Garcia seconded Lee's claims by rationalizing the need to look back and gather all the songs that defined Slapshock for the fans and the local industry as a whole.

"Ten years, feeling namin set aside muna natin ‘to, then on to a new beginning. New challenge naman for us," nodded Jamir.

The band, collectively known as Slapshock, introduced heavy guitar riffs, ferocious pounding punctuated with gut wrenching screaming and an overall irreverent attitude towards OPM mainstream while courting it at the same time.

After ten years of tours, recording and all the other changes within the decade, Slapshock never experienced any lineup changes.

"We were able to work out our personal and creative differences," confided Jamir with a sigh of relief. "I don't know but somehow we managed to survive without any casualties."

MATURE MUSICIANS. It would be incomplete to classify the band merely as a rap-metal act. Slapshock's lasting appeal has always been their ability to evolve and fuse other genres to keep them from being predictable.

Recollection attests to the band's versatility throughout the years. The 16 tracks are chronologically arranged, documenting the various phases of the five-piece hard rocking unit. A separate CD contains all of Slapshock's music videos.

Lee generously revealed that the band has a handful of new songs, which they're hell bent to release as soon as possible. Maturity and experience are likewise shaping the band's musical point of view.

By all indications, Recollection could be Slapshock's last with EMI. The band members were honest enough to admit that they have other plans and would want to explore all the possible opportunities out there.