Sam Tsui and Kurt Hugo Schneider, from YouTube sensations to concert performers in the Philippines 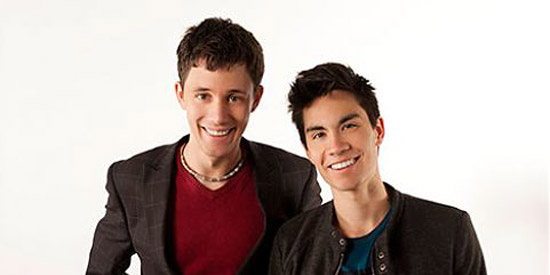 YouTube sensations Sam Tsui (right) and Kurt Hugo Schneider will perform on June 25 and 26 at the SMX Convention Center.

Sam Tsui and Kurt Hugo Schneider are Internet sensations with a worldwide fanbase. Their YouTube channels, TheSamTsui and KurtHugoSchneider, have loyal followers by the millions and their appeal is obvious. Fresh and endearing, the two collaborate to offer popular covers, creative mash-ups and original songs.


And now they're here in the Philippines for two nights only. Watch them as they perform their brand of music on June 25 and 26 at the SMX Convention Center.

The two friends were high school classmates, collaborating projects even until college in Yale.


Youtube was their stepping stone to stardom as their innovative music videos caught fire online. Sam agrees that YouTube changed their lives. "Before it existed, it was a lot more difficult for people like us who are just musicians who love to make content and share it with people. With a platform like YouTube, we're actually, despite the fact that we're being in the U.S., we're able to share it people all over the world including here in the Philippines where we've never been here before and yet we already have fans and people consuming our music."

What can fans expect from their two-night concert series? Sam reveals, "We have a good mix of things. There's going to be a lot of covers [from Lady Gaga, Katy Perry, One Direction, Bruno Mars, Adele, Justin Timberlake and more] and a lot of the medleys [like the infamous Michael Jackson medley] and mash-ups [including the most recent Frozen's Let It Go mashed up with Passenger's Let Her Go] that we've done online.

"Most of the new material that people can look forward to is original stuff because we love playing that. We released an album called Make It Up last year and in addition to stuff now, we're playing some never before heard materials. The new stuff fans can get excited about is the original stuff so... they've never heard some of this stuff before so we're very excited about that."

As for their new material, the pair also worked on humorous short videos parodying High School Musical as a College Musical but now Sam reveals more to come at the end of 2014. "In September, we're actually releasing a full feature length movie version that we shot a little while back. There's going to be a lot of jokes and comedy and, in that, I actually spend a good 20 minutes of the movie in my underwear only. So fans can look forward to that."

Sam and Kurt are still quite young at 25 years old and they have their lives ahead of him. As for their dream projects, Kurt states that, "We love to do videos and putting them out online but honestly I think the most fun is performing and seeing people's faces and getting that immediate reaction from people..."

Sam adds, "I would say the dream project is like a world tour. we're already getting a little bit of that right now like coming to Asia and it's the most incredible that we've got to do so I think just doing this on a larger scale, getting to go to all of the places because YouTube allows us to connect with people in some of the most random places around the world. Our goal would be to get to as many of those places as possible."

Sam and Kurt will be visiting other Asian countries but most of their exposure is still through YouTube. In terms of what's real and what isn't, Sam points out: "I would like the public to know that the us they see in the videos is 100% us and I think that sometimes that after we've been doing it for so long and we kind of have a routine and a system of a way we do these videos, I think it's just important to remember that at the end of the day, we're just, we really are just two kids who love to make music and do that.

"Our life is not super, incredibly glamorous; it really is on a day to day basis. Just us meeting up, getting lunch, working on some music, playing some games. And so when they see our videos, I think I just want people to know that we're really very normal people who just happen to make music that people enjoy."

Along those lines, Kurt adds: "Just trying to say, stay true to who we are, and just continue to put out content that we genuinely love. We try to not just phone it in when we make a video. We try to, each time, give it all we can and always show them who we are.

Sam follows by saing, "One thing that we've both learned that especially in this world of new media, digital media, as I said it's important to be yourself instead of putting out content that is sort of just doing your best to approximate what you've already seen or what you already know. It's so important to be putting out content that comes from somewhere genuine and that's what people have responded to in our music.

So on to more genuine, personal bits about these two talented boys.

How do you relax and what hobbies do you guys have?

SAM: "I love to paint... especially if I'm having a stressful day, I'll just whip out the canvas and paint and do like a landscape or something."

KURT: "I'm a huge nerd, which a lot of people know. I play games, whether it's on the computer or chess."

SAM: "Up in the hotel room, I was just belting out "All of Me" by John Legend.

KURT: "I like 'Happy' [by Pharrell Williams]. It puts me in a good mood.

What do they miss from home?

SAM: "I miss having Wifi all the time, cuz I live on Twitter and Instagram. I love to post and I miss that I don't get all the time here."

KURT: "I would say always being around friends, like, right on tour we're with each other a lot, which is awesome---

All joking aside, Sam and Kurt are as wonderful as they are in person as they are on stage. Kurt addressed his Pinoy fans by saying, "We've wanted to come here for so long and this is our first time so we love you guys, thank you so much for supporting us and we can't wait to rock out."

Sam wraps up by saying, "We absolutely can't wait to see all your smiling faces at the show. We want you to bring your loudest screams, your loudest cheers. We're going to put on the best show we possibly can and it's going to be a ton of fun for all of us so I hope to see you all there."

Sam Tsui and Kurt Hugo Schneider are performing in Manila for only two days. Catch the duo on June 25 and 26 at the SMX Convention Center. For tickets, go to www.smtickets.com and Ticketworld Online.