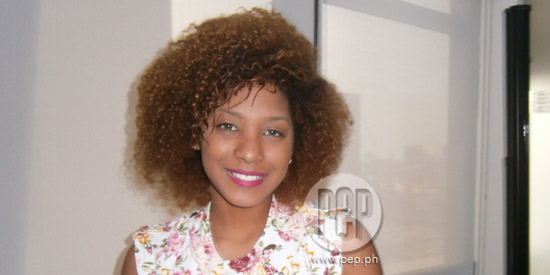 Jessica Reynoso of The Voice PH fame released a new single titled "Just Like You." She also signed up with Apl.De.Ap's record label, BMBX (Boombox Entertainment).

The Voice of the Philippines finalist Jessica Reynoso confides that she has had her share of being discriminated because of her skin color.

The 17-year-old half-Filipino, half-African-American singer completed her five- year contract with GMA-7 after joining Popstar Kids in 2007. However, she says she didn't get much attention and exposure, a predicament that she attributes to her skin color.

Does she still get this treatment after joining The Voice?

Jessica, who hails from San Pedro, Laguna, is currently on her third year in college, taking up Air Freight Operations in PATTS College of Aeronautics in Parañaque.

ON HER COACH AND MENTOR APL.DE.AP. How would she describe her The Voice PH mentor Apl.de.Ap?

Jessica says coach Apl likes to keep things light during rehearsals but is also strict when it comes down to business.

Everything seemed to change for Jessica when she met Apl.de.Ap.

The Black Eyed Peas member took her under his wing because he instantly felt a connection with her as though Jessica was his long-lost sister. During the blind auditions of The Voice Season 1, Apl.de.Ap mentioned that he and Jessica shared the same story: both of them never had the chance to meet their biological father.

According to the young singer, the best advice she received from Apl was to simply be herself.

Jessica is the newest addition to the roster of artists who signed with Apl.De.Ap's record label, BMBX (Boombox Entertainment). She released a new single titled "Just Like You" distributed by Warner Music Philippines.

ON INFLUENCES AND ASPIRATIONS. Jessica says she discovered her musical inclinations when she was just five years old.

The singer says she wants to be an inspiration to all the kids who have been underestimated by other people, which is one of the reasons why she auditioned for ABS-CBN’s reality singing competition.

Who does she look up to in the local music industry?

Out of hundreds of singers in the Philippines, what sets her apart?

Mitoy Yonting from Team Lea Salonga emerged as the champion.