Into The '80s concert brings together music icons 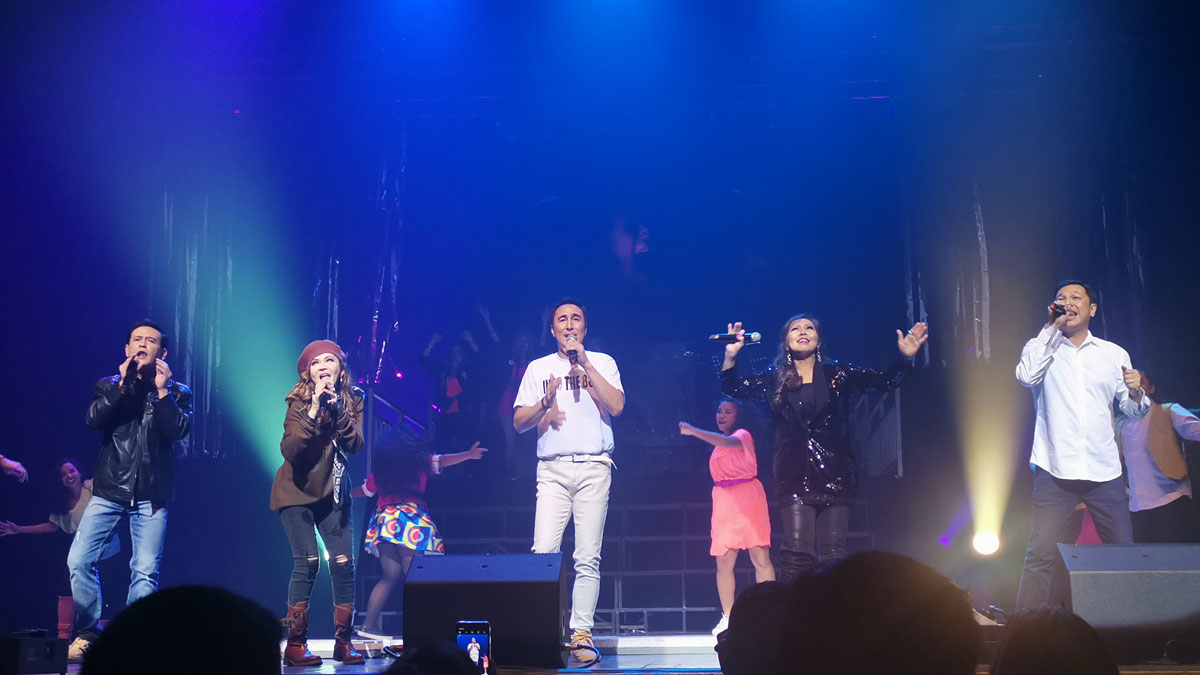 Raymond Lauchengco, Lou Bonnevie, Gino Padilla, Jam Morales, and Jett Pangan took the crowd of Solaire Theatre back to the eighties during their concert aptly titled Into the '80s.

The 1980s is the decade that resonates the most with the generation now in their forties, fifties, and up. They fondly remember, albeit with the occasional cringe, the times they wore big shoulder pads, power suits, and even bigger hair. The more volume and the higher it went, the better back then.

The concert Into The '80s presented by Solaire Theatre is primarily targeted to help that generation reminisce the good ole days. This is not to say that millennials—especially those born in the spectrum of the '80s—don't have a certain fondness for this era, too. Many faces in the crowd reflected the 20s-30s age range, but it was clear that music knew no bounds as they, too, enjoyed the evening.

The full house of Solaire Theatre for Into The '80s is proof that the '80s never really left and has just been grooving on. Bringing together iconic names who came to represent Philippine music of that decade, the concert Into The '80s was a resounding success, truly a real party.

Singing their own songs was one of the evening's highlights as each singer had their moment to showcase the songs that they popularized and became the classic hits that defined the 1980s.

Into The '80s was an auditory and visual feast from start to finish.

Fans had a chance to listen again to "Growing Up," a song featured in the movie Bagets, which Raymond starred in; as well as "Enveloped Ideas" and "Salamat," which are identified with Jett as much as they are identified with The Dawn. Lou entertained the crowd with "I Need Your Love" and "Love Me Tonight" while Gino reminded everyone of the popular toothpaste commercial featuring the song "Closer You and I."

The songs "Smile in Your Heart," "Even If," and "Please Be Careful With My Heart" were all certified hits that made Jam a household name in the eighties. She made sure to include them in the repertoire that night.

"Growing Up," written by Gary Valenciano, is not just Raymond's song but it was something synonymous with a generation that was finding its bearing and trying to adult (a new term today but that is essentially what they were doing then).

"Salamat," recognizable today because of its signature notes, cannot be removed from its rockstars origins in 1987 thanks to The Dawn.

"Closer You and I" remains to be a song that speaks clearly years from when it was first released.

While "Please Be Careful With My Heart" is now more known because of its use in a hit teleserye from 2012 to 2014, it was originally composed by Jose Marie Chan back in 1982 for Jam, who would belt it out time and again.

The crowd happily sang along, clapped the signature clap of the decade, and waved the waves that marked the decade.

Raymond showed how he can still hit those notes with "Electric Dreams" while Jam proved she still has the magic touch with "Xanadu."

"Eye of the Tiger" is such a powerhouse song that Jett rocked easily, complete with the trademark look. Meanwhile, Gino busted his cool moves to match "Ghostbusters."

Performing "Footloose" was a moment for Raymond, Jett, and Gino to sing together as Lou Bonnevie belted out "Flashdance...What a Feelin.'"

While people sang and danced along, you could also feel how much everyone respected the performers by making sure to not sing overly loud and within bounds of what is acceptable at Solaire Theatre. So yes, a lot of singing, clapping, grooving--but also so much more appreciation for the stars of Into The '80s who showed that they still have the stamina to mount concerts such as these.

The performers should be commended for managing to bring the audience to its feet song after song. A night featuring songs of the 1980s is not complete without "Rhythm of the Night," which managed to bring everyone much joy because the whole roster of stars came out for this song. Its beat and dynamics prompted concertgoers to just step up, dance, and sing out.

Feel-good songs like "Wake Me Up Before You Go Go," performed in the cutest possible way by Gino Padilla and "99 Luftballons" performed by Jam are just two of the songs that serve as reminders that the eighties has been entrenched in our collective pop consciousness.

John Robinson, who made a name for himself as one of the first DJs of the decade and spinning in the popular Makati disco called Rumors Disco, came on as a guest to help weave together the segment that featured Billboard Top Hits from 1980 to 1989.

Back when Spotify was not yet thought of and even MTV was still an infant, the Billboard Top Hits (which you could read in special magazines or hear on the radio) were how people kept track of what was hip and hot in the music scene. Today, the list still holds so much power but imagine in the eighties, it was one of the few and credible ways that a singer could say, 'I made it.'

You may not have been born back then but the reason so many of us still know these songs is their presence in video games, romantic comedies, and more.

While arguably many of the songs we talked about are favorites of the decade, the suite featuring "Uptown Girl," "Another One Bites the Dust," "I Wanna Dance with Somebody," "Together Forever," and "Total Eclipse of the Heart" are the tried and tested favorites of the '80s.

The reason they gained such fandom heights is their use, reuse, and constant presence in anything from song remakes, movies, videos, commercials, and more.

The cast of stars took on one song each and gave these ever-so recognizable songs the justice they deserved as the crowd responded with the enthusiasm of everyone having gone into an '80s time machine.

Including dance hits of the decade proved to be a master stroke of brilliance of Into The '80s. "State of the Nation," "Just Got Lucky," "Build Me Up Buttercup," "Whip It," "We Got The Beat"—these songs had people on their feet back then and they have that timeless quality of enticing listeners to get up and dance the night away.

Considering how seats in Solaire Theatre are comfortable and meant to be enjoyed, by this time, a lot of people took up spaces in the aisles to dance to the beat with every bop and wop.

Into The '80s ended by playing classics such as "Take On Me" and "Celebration" that were also used to conclude a long night of dancing and singing back in their day.

If anything, Into The '80s is proof that the original titos and titas are cool and can find common ground with millennials in terms of good, danceable, and easy-to-sing-along-with music.