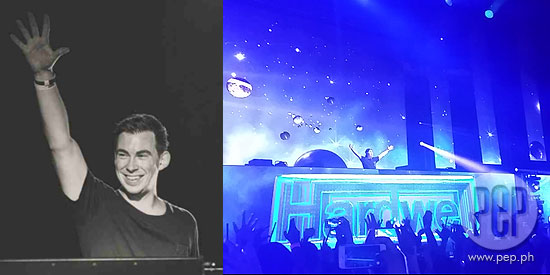 Dubbed as Go Hardwell or Go Home, DJ Hardwell's concert proved to be a success as a huge number of fans flocked to SM MOA Arena last night, October 1.

Known for his elaborate stage set-ups at the international concert scene (i.e. Tomorrowland music festival in Brazil), DJ Hardwell proved to be just as hip for the Go Hardwell or Go Home Manila leg with the spectacular LED visuals that accompanied his music.

Every now and then, the energetic vibe of the crowd was further hyped by the fireworks display, laser lights, and burst of confetti that were also made part of the show.

But of course, the fans got all revved up by the music and even sang along DJ Hardwell’s original mix titled “Dare You” featuring Matthew Koma.

The 26-year-old Dutch DJ also played his other hit singles such as “Arcadia,” “Like A Spaceman,” “Apollo,” and “Never Say Goodbye.”

There was never a dull moment as DJ Hardwell’s set list included a lot of remix of mainstream songs such as Coldplay’s A Sky Full of Stars, Magic!’s “Rude,” Passenger’s “Let Her Go,” Lana Del Rey’s “Summertime Sadness,” and Iggy Azalea’s “Fancy.”

His performance of Calvin Harris and Alesso’s “Under Control” kept the audience going with more visual feast from the LED display.

Proof that everyone couldn’t get enough of DJ Hardwell was the loud clamor for encore when the Dutch man started to say goodbye to the audience few minutes before 3 A.M.

For his parting shot, he exclaimed, “Once again Manila, you’re amazing! Thank you guys so much!”