Shane Filan fends off "marriage proposal" from Filipino fan; he promises to return for concert in 2015 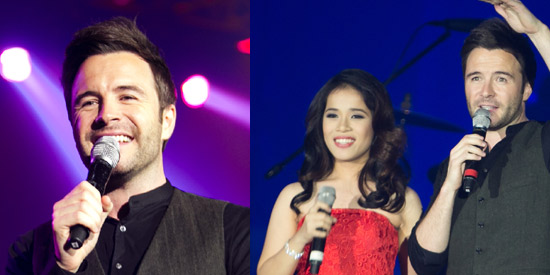 "It’s best to sit down to just chill out and sing. We do a lot of rehearsals so it’s nice to make it to the stage," said Shane Filan (left frame) about practicing for his You and Me Tour. Klarisse De Guzman of The Voice PH fame performed with Shane during the Manila leg of his concert.

Shane Filan returns to the Philippines for his first solo concert as part of his You and Me Tour. The event took place last October 1 at the World Trade Center.

The former Westlife member showed off his vigorous spirit and sincere enthusiasm as he performed for Filipinos during his one-night-only concert.

“Mabuhay Manila! What a crowd!” the 35-year-old singer shouted at the top of his lungs. In response, the Pinoy crowd emulated his energy and shouted even louder.

“I told the boys, when I go to the Philippines, it’s going to be very loud, and you didn’t let me down Manila! It’s very loud, it’s very loud!

Shane opened his concert with “When I Met You,” and “Everytime.” He also performed more songs from his album, You and Me, including “Baby Let’s Dance” and “About You.”


He singled out the song “Once,” which he described as one of his favorite songs in the new album.


He said about this particular track: “It’s about life, it’s about people. You know, everyday we worry about something, but there’s no point to that, you just have to try to live your life. Everybody would make mistakes, everyday people would get on with their lives, and you have to enjoy it while you can.”

The former boyband member expressed his gratitude to the fans who allowed his You and Me album to become a bestseller in the country.

“Thank you so much for making my album number one in the Philippines. It’s pretty cool to see that.”

BRINGING BACK WESTLIFE. The former Westlife member took concertgoers back to 1998 when he performed hits such as Uptown Girl,” “What Makes A Man,” and “What About Now.”

To the delight of many Westlife fans, the singer also performed “Swear It Again,” which was one of their most popular songs when they first debuted as a band.

He then requested the audience to turn on their flashlights and wave it above their heads as they sing along “You Raise Me Up.”

A DIFFERENT SIDE. His Manila concert also served as a way for the romantic crooner to display his funny side! He asked the audience, “you want a bit of a dance?”

Shane then rocked the stage as he put on his shades, turned around, and then moved his hips from left to right while singing Robin Thicke’s “Blurred Lines” and Avicii’s “Wake Me Up.”

And he didn’t stop there! Once in a while, Shane would pose for the camera while saying “Picture, picture.”

He laughed heartily and asked the crowd, “Do you feel the vibe? We’re on a funny mode tonight!”

DUETS. The Voice of the Philippines runner-up Klarisse De Guzman once again had the chance to sing with Shane for the song “Flying Without Wings.”


Shane complimented Klarisse’s vocal prowess by saying, “This girl I heard her for the first time in The Voice of the Philippines. I sang with her on the finals and I just couldn’t get over her voice, and even tonight when I listened to her backstage.

“She has one of the most beautiful voices I’ve ever heard.”

Aside from the duet, Shane also loved singing with his fans. He’d place the microphone facing the audience, and fans’ voices would fill the World Trade Center.

Shane surprised the crowd when he announced that he wanted to bring one person on stage. Girls and boys in the area suddenly started raising their hands while shouting “Me!”

But then there’s a catch, Shane added, “I’m gonna pick someone from the back, behind the barriers.”

He then asked the ushers to bring up a girl in yellow. She stood frozen in front of Shane, but was able to tell him that, coincidentally, it was her birthday that night!

The Irish singer-songwriter led everyone to sing “Happy Birthday” for her, including the audience and band members. She then asked for a birthday hug, and he obliged by hugging her more than four times!

The girl, named Rochelle, then took her seat beside Shane as they performed “Mandy” together.

Shane was caught off guard when Rochelle suddenly changed the lyrics to “but I need you today, oh Shane,” instead of “Mandy.”

FAN LOVE. Dozens of fans wore matching blue Shane Filan shirts. There were banners and streamers that could serve as reminders of the good ol' days.

Shane even read out loud one of the banners saying, “I’m pregnant and I’m going to name it after you.”

He smiled and replied, “Shane is a very good name though.”

Shane would also repeatedly say “I love you” as much as the audience would, “You said you love me about 25 times, I love you too.”

He was extremely sweet to his fans. He’d constantly keep eye-contact with them, and even try to start a conversation with those standing near the stage.

The singer even pointed at one girl stating, “You’re waving a lot since I came on stage. I see, I see, don’t worry I see it. I’m here, and you’re right there.”

He also overheard those shouting at the back as one particular lady screamed, “Will you marry me?”

Being a father of three and a loving husband to Gillian Walsh Filan, Shane gushed, “I told you I love you, and that’s as good as I can do. I can sing for you, I can love you, but that’s it.”

Still reminding everyone of his marriage, the heartthrob gave his rendition of his favorite love song of all time, “Amazed.”

He narrated, “It’s a song I used to practice when I was younger in the bedroom with the mirror and a hair brush. And it ended up being my wife’s favourite song as well, so this is like our song.

“It is the perfect love song if you got that somebody special in your life.”

One fan then answered “YOU,” saying that Shane is the special person in her life.

The singer performed the song beautifully.

To heed the request of his Manila audience, he also performed a portion of “Beautiful in White,” adding to the “kilig” vibe that night.

Shane received an appreciation plaque from his fans club that stated, “We hereby present this to Shane Steven Filan, you are such an amazing singer-songwriter. Mabuhay from the Philippines.”

The singer commented, “This is so cool, thank you. Is this from the fanclub? I got my t-shirt, too. Thank you.”

ENCORE. With the dancing light fading away, and the lively band slowly making their way out of the stage, Shane completed his concert.

Suddenly, one band member went up the stage to tell everyone that the concert will continue but only if the audiences shout as loud as they can.

He used his hands to point left, center, and right, indicating which section should shout at that moment. Like an orchestra, the fans obliged, then laughed it off when they made a mistake.

The laughs quickly turned into screams when Shane finally went back on stage wearing a black vest over a white polo to sing his last two songs “Everything To Me” and “Knee Deep In My Heart.”

“It’s been an amazing tour, I’ve been on tour for three weeks all over Asia. It’s been a lot of fun because this is my first ever solo tour.

“To have all you guys coming down tonight it means a lot to me. Coming down here and making this special.

“This is the last show of this tour, we picked Philippines as the last stop. I want this to be a night to remember for you guys.”

And it was definitely a night to cherish and remember. The whole set-up was so intimate that Shane was able to become closer to his Filipino fans.

He ended the night with a promise, “I’m so glad that the Philippines was my last show. You guys are fantastic as always. I’ll see you again next year with a brand new album, 2015.

“With my new album, next year, Philippines you’re going to sing with me again.”