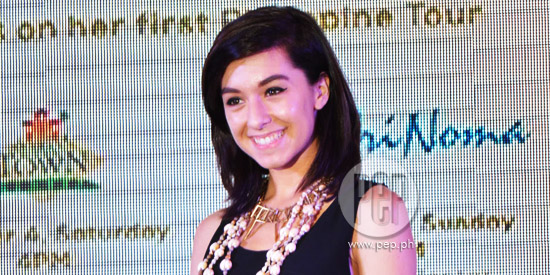 Christina Grimmie on having Maroon 5's Adam Levine as a mentor: “If you love Adam Levine, I’m telling you, you love him for all the right reasons. He’s an amazing, amazing person.”

The Voice U.S. Season 6 finalist Christina Grimmie is in the Philippines for her two-day exclusive performances at the Ayala Malls on October 4 and 5.

PEP.ph (Philippine Entertainment Portal) and other media got to meet her during the press conference held earlier, October 3, at the InterContinental Manila Hotel in Makati City.

Christina gave a sneak peek of what people can expect from her shows. She was originally set to perform her newest single “Must Be Love” but instead, she treated the media to a soulful performance of the song “With Love.”

Christina told the press, “It’s cool to say that the Philippines is the first place, you know, that I got to go outside America and Canada.

“And I’ve always wanted to come here, by the way, since I don’t know… years ago.”

Christina was definitely excited to meet her Filipino fans especially after noticing how big her fanbase is in the country.

“I had a lot of Filipino fans and it was actually because they have such a big online presence.

“I’m sure you all know that Filipino fans are the real deal!

“So people are hitting up on me all the time and [asking] ‘Why aren’t you here yet?’”

The 20-year-old singer also expressed her delight for her Filipino fans after she announced on Twitter that she will be performing in the Philippines.

She recounted, “I don’t have the exact numbers but I get a lot of retweets from a lot of fans.

“However, when I posted the first time that I’m coming to the Philippines, I really don’t even know what happened to my social media.

“It was overwhelming. I’m like I’m not used to that, it’s crazy.”

ROAD TO STARDOM. Christina started out as a cover song artist on YouTube. This paved the way for her to become the opening act in Selena Gomez’s Stars Dance tour in Canada and the U.S.

Christina narrated, “Well, I started on Youtube and I was singing, and that was five years ago.

“And then, you know, I’ve been doing that for a while and things kinda elevated.

“I went on tour with Selena Gomez and that was a pleasure, it was amazing.

“And after that, I went on and did my own music and came out with an album.

“Two albums really and then yeah, which was awesome.

“And then I went on The Voice and I hear the Philippines loves The Voice.”

Asked about what was it like working with Selena, Christina answered, “I will say Selena Gomez is a pleasure, an absolute pleasure to work with and especially open for.

“I can’t really think of any other artist that I would rather open for.

“She’s extremely unique in a sense that she’s not a diva, she’s not tha kind of celebrity that, ‘Oh, I’m afraid to walk in her ‘cause she might yell at me.’

“And she had been a mentor of me through out that whole tour and I learned a lot from her.”

Christina also said that Selena congratulated her after getting through the blind auditions of The Voice.

“She did let me know how happy she was for me directly through the line.

“And yeah, she’s truly a sweetheart.”

THE VOICE. Christina joined Adam Levine’s team during the sixth season of The Voice U.S.

The American singer-songwriter finished third that season and Adam even promised that he’d sign her to his record label 222 Records after the show. Ultimately, Christina signed with Island Records.

The press curiously asked about her working relationship with the Maroon 5 vocalist. She said, “If you love Adam Levine, I’m telling you, you love him for all the right reasons.”

Christina added, “He just makes sure that we both knew what we were going to do on stage.

“He made sure that I was 100 percent comfortable with that.

“He makes sure that the song choices was of my preference and he was like extremely nurturing.”

What does she think her quality that made her gain fans and followers even before The Voice?

She answered, “One thing that I noticed that a lot of people were telling me as well is that I’m relatable to people.

“And I look up to people that are relatable.

“I was a little quirky, a little awkward, a little, slightly comedic, and I sing.

“I think the people just saw that and liked that.

“A lot of things about me I think that people fall in but are afraid to act on, ‘I’m afraid to you know be a little dorky, a little blah blah blah…’

The singer added, “For me it’s a truly a blessing for me to inspire people, you know.

“But I’d love to continue to be that and I think that’s why I’m originally on YouTube.”

Christina said Stacie Orrico inspired her the most when she was starting out as a singer. She explained, “As a kid, the Internet was fresh and Youtube was there when I was like ten, you know.

“So I try to look up about Stacie Orrico and I think she was funny, and you know interesting.

“The things I found about her was you know, she was a little bit quirky and I’m a little bit, ‘Oh, that’s so cool of her.’

“So definitely from her singing style I learned a lot.

“Most of what I know was from her.”

This Saturday, October 4, Christina Grimmie is set to rock Alabang Town Center at 4 PM and Glorietta at 7 PM. This Sunday, October 5, she will perform at Trinoma at 7 PM.