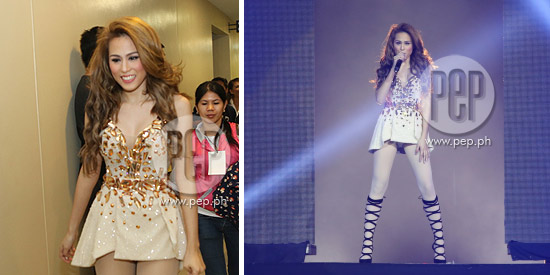 Toni Gonzaga dedicated Jason Mraz’s "I Won’t Give Up" to Paul Soriano, her boyfriend whom she describes as "that one person who never gave up on me." Toni celebrated her 15th anniversary in showbiz by holding a concert at the SM Mall of Asia Arena.

The audience cheered when the large video screen at the center of the stage came alive a few minutes past 9 p.m.

It showed a verse from the bible: "Before you formed in the womb, I knew you."

These words quickly dissolved and were replaced with black and white slow-mo images of a dancing Toni Gonzaga. Later on, these transitioned to black and white images of a teenage and then unknown Toni as well as pictures of her as a glamorous actress/singer/host and woman that she is now.

The Guillermo Mendoza 2012 Female Concert Performer of the Year awardee finally appeared on stage to the excited screams of her fans. For her first song, she belted out "This Love is Like," a single from her sixth studio album Celestine.

She followed it up with Zedd’s "Clarity," after which she knelt on stage and greeted audiences at the arena.

"Siyempre `pag anniversary dapat hindi lang kami dito ang nag-eenjoy on stage. So if you feel like dancing and singing, please do so. And let’s all have a great time tonight."

She then sang "Kahit Na," a Jumbo de Belen-penned song she interpreted during the 2013 Himig Handog songwriting competition. The song is also included in her Celestine album. Its lyrics were simultaneously shown on the giant screen as she invited audiences to sing along with her.

After the song she walked off stage while a black and white video of her is shown on screen where she revealed the origin of her self-titled concert Celestine. She also shared with the audience her dream.

"Toni Gonzaga is my screen name. My full name is Celestine Cruz Gonzaga. Si Celestine ang dream lang niya talaga…ever since I can remember, I’ve always wanted to be a singer. My biggest dream is to be known as a singer. I used to line up sa Mother Ignacia sa may ABS-CBN Audience entrance.

"The reason why we named this concert Celestine…is because it’s about time I show the people who I really am. All these years they just know me as Toni--she hosts, she sings, she does movies. A lot of people just know me by my name. But they don’t really know who I am in real life.

"This is something to share to everyone: my musical influences, the struggles I’ve been through, the hardships, the endeavors and how through it all, I was able to surpass it and fulfill my dreams."

After the video, Toni Gonzaga appeared in a sparkling red gown. She sang her single "We Belong" from her second album You Complete Me but suddenly stopped in the middle of the song to disarm the audience with her candidness:

After the song, she further engaged in humorous self-depreciation as she remarked, "Thank God talaga for the blower…May igaganda pa pala ako," in reference to the blower below the stage that helped create her gorgeous wind-swept hair.

The audience responded with rapturous applause and deafening screams after being acknowledged. Toni had to pause and wait for the screams to die down. She quips, "Okay na? Di n`yo kinaya?

"I was standing at the exact same spot kanina, eight hours ago. Before I left the stage, wala pa kayong lahat, I closed my eyes and said a very simple prayer…I open my eyes tonight and I’m looking at an answered prayer kasi nakarating kayong lahat. You don’t know how much this night means to me.

Toni again stopped mid-sentence when she saw and greeted the audience seated at the bleachers.

"Anyway going back to my story, this year I did a movie that made a huge impact in my life. It changed me not just as an actress but as a person because I learned so much from it."

Toni again stopped to almost drink water but remembered that she might not be able to.

PIOLO PASCUAL NO-SHOW. At this point, the two screens on each side of the stage showed celebrity audience members, namely Bianca Gonzales and Mariel Rodriguez.

Other personalities seen in attendance and were featured in the giant screens were Dr. Vicky Belo, Edgar Mortiz and Chavit Singson and newly engaged couple Isabel Oli and John Prats.

"I was talking about the movie, I just want to share with you the theme song. Let’s relive the love story of Ginny and Marco."

Toni looked for an audience member to have a duet with and she spots in the audience The Voice PH Season 1 Team Bamboo member Paolo Onesa.

He comes up on stage to do a duet of the song "Say Something" by A Great Big World.


ENDING UP WITH TRUE LOVE. When Paolo exited the stage, Toni continued with her spiel:

"You know there are some people in our lives that we just have to give up. There are people in our lives na seasonal lang. They’re not meant to stay forever. Dapat daw `di n’yo nilalabanan yung ganun. Sabi nila, some people are meant to fall in love with each other but are not meant to be together. Baka dun kayo tinuturan ng leksyon. Lumaklak din kayo ng realidad, `wag adik sa pag-asa.

"If something has made you a better person, someone leaving, hayaan mo lang. Let them go kasi `pag pinakawalan n`yo na ang taong yun then you’re ready to meet the one you’re supposed to spend the rest of your life with. If you found the person, whatever happens you’ll never give up on him. [This song is for] that one person who never gave up on me."

Toni sang Jason Mraz’s "I Won’t Give Up" with her chair positioned in front of boyfriend Paul Soriano who is in the audience and seated near the stage.

After her song, she once again exited the stage while a video of Toni rehearsing with the G-Force is played.

VICE "POGI" AND RICHARD YAP. After her dance number, she introduced Vice Ganda as her very special friend.

Vice Ganda came out decked in a military style-inspired ensemble. He sang a lively "Boom Panes" while wearing dark shades. Half naked G-Force male dancers served as his back-up performers.

After the song, Toni Gonzaga thanked the G-Force – a cue for them to exit the stage - to Vice Ganda’s disappointment.

Vice Ganda then changed his tone and asked that Toni leave the stage instead.

"Thank you so much Toni Gonzaga. Please remain here G-Force."

When several male G-Force dancers assisted Toni Gonzaga change her costume on stage, Vice Ganda was quick to use it as a hilarious punchline.

He proceeded to grab the jackets of the male dancers to reveal their bare chests. The audience laughed in glee at the comedian’s antics.

When the audience cheered Vice on and called him pogi – Vice expressed anger and not flattery.

Vice then turned his attention to Toni:

When Toni returned the compliments and praised Vice, he quickly replied:

Toni turned serious as she revealed how Vice said agreed to perform in her concert.

Vice then introduced his co-star in his upcoming movie Praybeyt Benjamin for the 2014 Metro Manila Film Fest: Richard Yap.

RECONCILING WITH SISTER ALEX. After the song, the two exited the stage as a video of Toni and her sister Alex is seen. The video revealed details about the two sisters.

Toni highlighted the evening as memorable due to Alex’s unique song number with her.

The two proceeded to sing Celine Dion’s powerful ballad "It’s All Coming Back to Me Now" and Iggy Azalea’s "Fancy."

Toni then sang Whitney Houston’s "Count on Me" for Alex while Alex sang "Do you Want to Build a Snowman" for Toni.

GIVING BACK. After the Toni and Alex good-natured rivalry, Toni took her place behind the keyboards to play a song that she composed while shooting Starting Over Again, her blockbuster movie with Piolo Pascual. The song titled "Awit ni Ginny" is also included in her album Celestine.

Toni aimed to inspire when she introduced her next number:

"I want to do something really special tonight. There are two important moments in someone’s life: the day you were born and the day you find out why. Fifteen years ago, I found mine. I didn’t get to this stage because I’m better than anyone or I’m the best. I’m standing here tonight celebrating 15 years of my life in the industry, due to God’s grace. I want to share with you one of the first few songs I learned in grade school. This really describes what I’m feeling right now."

She sang "Amazing Grace" with the Payatas Boys choir.

After which she proceeded to sing Beyonce Knowles’s "I Was Here."

The last thirty minutes of the concert is where she gave her version of Demi Lovato’s "Neon Lights" and Zedd’s "Stay The Night."

Her last song for the audience is "Catch Me I’m Falling," from her third album Falling in Love.

She again expressed her gratitude for everyone who watched her concert.