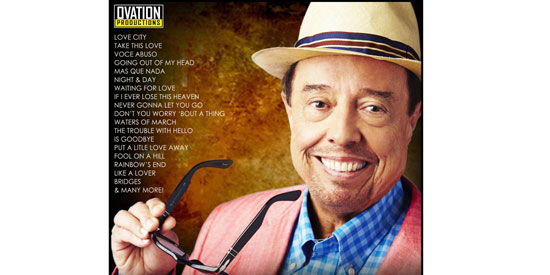 Sergio Mendes & Brasil 2014 will take place at Smart Araneta Coliseum on November 15 and the Waterfront Hotel Cebu on November 16.

The catchy and delightful sound that instantly stirs listeners to sing, sway and swoon to its beat will sweep the local concert scene when bossa nova legend Sergio Mendes returns to Manila with his band for a live concert on Saturday, November 15, at the Smart Araneta Coliseum in Cubao, Quezon City.

The Big Dome show will kick off the two-city tour dubbed Sergio Mendes & Brasil 2014 Live In Manila! that will end with another concert on November 16 at the Waterfront Hotel Cebu. American singer Joe Pizzulo will be featured in the shows.

To be mounted by Ovation Productions, the musical event will spotlight the bossa nova sensation from Brazil as he showcases his wonderful and easy-listening sound and style that made him the most popular musician in South America and an international star in the past fifty years.

Mendes will take concertgoers through a breathtaking array of hits, such as “Mas Que Nada”, “Magalenha”, “One Nation”, “Timeless”, “What Do We Mean To Each Other”, “For Me,” “Night And Day”, “The Look Of Love”, “Fool On The Hill”, “Timeless”, “Scarborough Fair”, “Pretty World”, “Never Gonna Let You Go”, “Funky Bahia”, “Chorado”, and “What The World Needs Now.”

As a young boy in Niteroi, Brazil, Sergio Mendes attended the local conservatory of music with the hopes of becoming a classical pianist until he switched at the age of 15 to bossa nova when the popular craze for the jazz-infected derivative of samba swept Rio de Janeiro in the mid-to-late-50s.

Moving to the United States in 1964, he achieved instant success with his band Brasil ’66 following the release on A&M Records of its self-titled debut album that featured a mix of light jazz, a bossa nova beat and contemporary soft pop melodies.

The debut LP rose to Number 6 nationally with the strong performance of the single, “Mas Que Nada”. The second album, Equinox, produced a trio of hits, “Night And Day”, “Constant Rain (Chove Chuva)” and “For Me.”

The third album, Look Around, climbed to Number 5 behind a Number 3 single of the group’s cover of The Beatles’ “Fool on the Hill” and an accompanying hit with “Scarborough Fair,” based on the Simon & Garfunkel version of the folk song. “Crystal Illusions”, released in 1969, featured a version of Otis Redding’s “(Sittin’ On) The Dock of the Bay” and the hit single, “Pretty World.”

Mendes attained mainstream prominence when he performed the Oscar-nominated Burt Bacharach and Hal David song, “The Look of Love,” on the Academy Awards telecast in April 1968. Brasil ‘66’s version of the song quickly shot into the Top 10, peaking at No. 4 and surpassing Dusty Springfield’s version from the sound track of the hit James Bond movie, Casino Royale.

From 1968 onwards, Mendes ennjoyed a wave of immense international popularity and performing on a variety of venues, from stadium arenas to the White House, where he gave concerts for both Presidents Lyndon B. Johnson and Richard M. Nixon.

After an absence of five years, Mendes returned to the music and entertainment scene in 1982, celebrating the event with his 1983 self-titled comeback album – his first Top 40 album in nearly a decade and a half – accompanied by his biggest chart single ever, “Never Gonna Let You Go,” which hit Number 4 on the Billboard Hot 100 chart.

In 1984, he recorded Confetti, an album that featured the hit songs, “Olympia,” which was also used as a theme song for the Olympic Games held that year in Los Angeles. By the time Mendes released his 1992 Grammy-winning album, Brasileiro, he was recognized as the undisputed master of pop-infected Brazilian jazz. During the same period, he performed with a new group, Brasil ’99 and more recently Brasil 2000 and has been integrating the sounds of Bahian hip-hop into his music.

In 2006, Concord Records released Timeless, his first album of newly-recorded materials in eight years, and which featured a catalogue of neo-soul and alternative hip-hop guitarists, most prominent of which was will.i.am of The Black Eyed Peas. The album was followed by Encanto in 2008 and Born Tempo in 2010.

Sergio Mendes & Brasil 2014 Live In Manila! is presented by Ovation Productions in partnership with Air21 and Fox International.