Matt Healy of The 1975 says during Philippine concert: "We’re bigger in this country than we are in our own f*cking country." 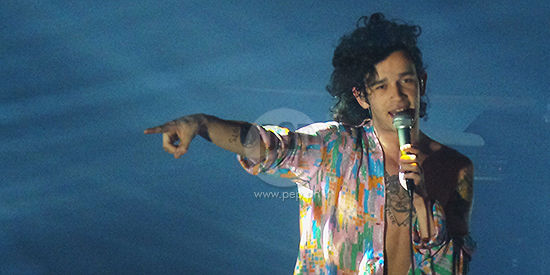 Matt Healy, vocalist of British boy band The 1975, says their Manila concert has the biggest crowd so far: “We’ve never been in anything quite this magnitude so we appreciate everyone who’s here.” He said they will return to the Philippines when they release their second album.

English indie rock band The 1975 heated up the SM Mall of Asia Arena last night, January 24. The four-member band is just one of the acts expected to hit the Philippines as part of #BritishInvasion2015.


The 1975 members Matt Healy, Adam Hann, Ross MacDonald, and George Daniel treated their Filipino fans to an eargasmic experience as they played their hits one song after another. This is the band’s second visit to Manila following a series of mall shows last year.

Before the boys came out to perform, house/ambient music filled up the Arena to set the mood. The audience—composed mainly of young females—couldn’t hide their excitement as they screamed at the sight of the band’s crew setting up instruments.

The four-member band kicked off the night by performing “The City” and “Milk” for their opening. As the band performed, white and blue lights streaked across the stage, providing a visual feast for concertgoers.

The band continued with “M.O.N.E.Y” with guitarist Adam Hann and bassist Ross MacDonald both playing the synthesizer. Vocalist Matt Healy greeted their fans by saying, “Hello everybody! We are The 1975 from Manchester, England. And you are Manila!”

The 1975 performed more songs from their self-titled full length album including “So Far (It’s Alright),” “She Way Out,” and “An Encounter.”

“Welcome to our first ever show in the Arena! The very first one,” said Matt. “This isn’t too big. I can see all of you!”

The band performed tirelessly during their two-hour long concert. Even Matt admitted that he got tired walking and dancing while performing on their wide stage.

“This is a big f*cking place. I’m really tired,” he candidly told the audience.

Matt looked a bit tipsy, swaying while walking around the stage. The band vocalist even stumbled after trying to jump off the elevated area where George’s drum set is located. Still, Matt gave an exhilarating performance.

As the concert went on, more familiar songs such as “Settle Down,” “Heart Out,” ad “Pressure” were played.

The band toned it a bit down with “Me” and “fallingforyou.” At one point, the audience cheered when Matt introduced their friend John Waugh as the newest member of The 1975.

Matt said, “Ladies and gentlemen, boys and girls, let me introduce to you our oldest friend and our newest member.

“Manila, give it up for John Waugh on the saxophone!”

The band finished off their set list with “You,” “HNSCC,” and “Menswear.” Matt, once again, had a conversation with their Pinoy fans, saying this is one of their most special concerts.

Matt explained, “We’ve never been in anything quite this magnitude so we appreciate everyone who’s here.


“Listen to me, this is a big room but I can see everyone, I can see all of you.”

Before they finished their set, Matt encouraged everyone to put their phones away as they performed their last few songs.

“I want you to connect with each other.

“Listen to me, I want everybody, for one song put your phones away.

Matt continued, “Manila, we are here for one night!

The 1975 ended their set with once of their most popular hits “Girls.”

ENCORE. “We want ‘Sex!’ We want ‘Sex!’ the crowd chanted as The 1975 concludes their first major concert in the country. “Sex” actually pertains to the band’s second single.

A few minutes later, Matt went out the stage solo and gave a soulful performance of the song “Is There Somebody Who Can Watch You” while playing the keyboard. John used his saxophone to accompany Matt’s performance.

Midway through his song, Matt asked everyone to keep quiet for the last minute of his solo performance.

He said, “Manila, I want everybody to be quiet for just one minute.

“But remember, shhhh-ing is louder than talking.”

Upbeat tracks “Medicine,” “Robbers,” and “Chocolate” then followed until the band finished off their encore with “Sex.”

Matt thanked Pinoy fans for their support and told them, “This country… we’re bigger in this country than we are in our own f*cking country.

Before saying goodbye, Matt assured fans that they will definitely come back to the Philippines when they release their upcoming second full-length album.

Matt said, “We have, after this show, we have two more shows and after that we are are f*cking finished.”

He continued, “We are currently, currently… very, very far into our second album.

“So in a couple of months we’re gonna make another album.

“We’re gonna put it out and we’re gonna head straight back to Manila.”