World-class Filipino singers perform at the CCP on February 15 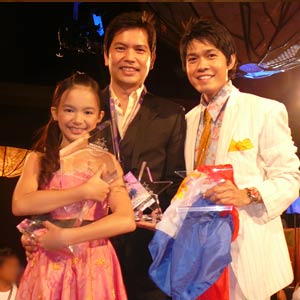 In the February 15 concert WAGI, grand champion singers Aria Clemente and Reymond Sajor of the 2007 World Championships of Performing Arts will perform with other world-class Filipino singers. They are photographed with Carlo Orosa (center), WCOPA national director for the Philippines, during the WCOPA awards night that took place in Los Angeles, California, in August 2007.

The year 2007 was a year of many triumphs for Filipino performers in various international competitions. To celebrate these victories, the Cultural Center of the Philippines (CCP) gathers the winners—silang mga nagwagi—and brings them together for a memorable performance under the musical direction of Ryan Cayabyab.

WAGI will be topbilled by the following artists:

Reuben Laurente, winner of the Gold Medal (Broadway), three Silvers (pop, R & B and world music) and a bronze (gospel). Laurente won these awards in the 2007 WCOPA Thirty-and-above group.

Dulce, one of the country's most respected singers, is a recipient of various musical awards both here and abroad. She also starred in musicals and performed extensively both in the Philippines and abroad. Dulce is a recipient of the "Lifetime Achievement Award" given by ALIW Foundation in 2003.

Kjwan, winner of the Ikon ASEAN award. The Ikon ASEAN is a regional music award designed to showcase and recognize talented artists from countries such as Malaysia, Indonesia and the Philippines. The First Ikon ASEAN was held on August 2007 in Malaysia, where Kjwan and another Filipino artist Vina Morales won the first title of Ikon ASEAN for Solo and Group categories, respectively. The vocalist of Kjwan is MTV VJ Marc Abaya.

Six prize-winning choirs will also perform in WAGI. These choirs are:

UE Chorale, winner of the Gold Prize, Classical Category, Grand Prix, Busan Choral Festival and Competition in 2007; Novo Concertante, winner of the Gold Medal, Folklore Category of the 23rd Takarazuka International Chamber Choral Contest in Japan in 2007; Sta. Teresita Parish Chorale, winner of the 2007 Grand Prize in the "A Voyage of Songs " International Choral Festival 2007 in Pattaya, Thailand; Hail Mary the Queen Children's Choir, Champion in the Music of the Religions Category of the 3rd Choir Olympics in Bremen, Germany in 2004; Mandaluyong Children's Choir, winner of the Silver medal in the Children's Choir Category and the Bronze medal in the Contemporary Music Category of the 2002 2nd World Choir Olympics in Busan, Korea; Coro de Sta. Cecilia (Top prizes, Asian open of the 1st Asian Choir Games in Jakarta, Indonesia in November 2007, Golden Diploma, Musica Sacra Category and Silver Diploma in the Mixed Vocal Ensemble Category).

The All Stars Hip Hop, which was named the 2006 World Hip Hop Champion, Philippine Philharmonic Orchestra, the national orchestra, and the 24th Southeast Asian Games Dancesport Medalists are also slated to perform in the concert.

Highlights of WAGI include the Gloria from "Misa," featuring Jed Madela as tenor soloist with the Philippine Madrigal Singers. This production number is dedicated to all Filipino artists and will feature the entire cast of performers in a show-stopping performance. The finale will be a rousing rendition of "Paraiso," as rearranged by Ryan Cayabyab and reinterpreted by the soloists and the different chorale groups.

WAGI is directed by Alex Cortez, with Floy Quintos as writer, Monino Duque as lighting designer and Eric Cruz as production designer.