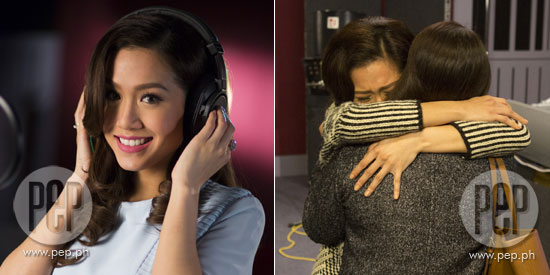 Rachelle Ann Go takes an eight-day vacation from her Miss Saigon stint to be part of the world premiere of Walt Disney’s film Cinderella in the Philippines.

The 28-year-old West End actress has been tapped by Disney Asia Channel to record the theme of Cinderella, “A Dream is A Wish Your Heart Makes.”

A huge fan of Cinderella since she was a kid, Rachelle Ann said it’s truly a dream come true to sing a Disney song that’s truly close to her heart.

“I still can’t believe that I sang the theme song for Cinderella. It’s still overwhelming.

“When I heard about it, sabi ko, ‘Totoo ba ‘to? Siguraduhin niyo muna,” she related in an interview with PEP.ph (Philippine Entertainment Portal) and two other entertainment reporters at Crowne Plaza Hotel earlier today, March 11.

Rachelle Ann excitedly shared that a representative of Disney Asia Channel even flew to London last week just to record the Cinderella OST during her free time.

“It was just amazing!

Like any other girl who grew up watching Walt Disney films, she admitted that she once dreamt of becoming a Disney Princess.

“That’s why when I did Little Mermaid [musical play] three or four years ago, na-enjoy ko yung moment.

Rachelle Ann was also grateful to Disney Asia for treating her to an unexpected reunion with her mom, Russel Go, in London.

“I didn’t know that she was coming to London. Regalo sa akin ng Disney yun.

Rachelle Ann arrived in Manila on Monday afternoon, March 9, for a quick vacation as well as to promote “A Dream Is A Wish Your Heart Makes” for Disney Asia Channel.

Aside from that, she also graced the premiere night of the Walt Disney film, Cinderella, in the country.

Rachelle Ann is also scheduled to perform “A Dream is A Wish Your Heart Makes” live on SM The Block on Friday, March 13.

Then she will be going back to London on March 17 for her Miss Saigon stint, which will end on May 9.