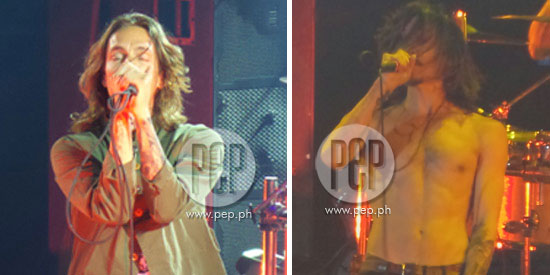 Brandon Boyd showcased his percussion skills during the March 13 concert of Incubus in the Philippines.

Rock fans filled the Mall of Asia Arena to the rafters for the Incubus concert last night, March 13.

The concert in the Philippines was filled with unforgettable moments ranging from a moving violin performance to a birthday tribute to Ben Kenney to seeing Brandon Boyd baring his torso during the final portion of the concert.

As concertgoers settled in, at exactly 8:00pm, the stage went dark,
then the first strings of the violin could be heard. Soon enough,
Lindsey Stirling is revealed onstage. She was wearing a black top with
sheer sleeves and arm warmers in bright pink, her black vinyl skirt fluttered above her knees; she was also wearing a pair of patterned silver leggings and lace-up sneakers. Like a contortionist, she feverishly played her black electric violin while skipping, spinning,
and dancing.

The America’s Got Talent and Youtube sensation displayed her unique
brand of music and performance: with backbreaking and foot-stomping moves to boot. Her songs, a fusion of pop, rock, electronica, and folk, were accompanied by keyboards and drums. Halfway through, she took the microphone and introduced herself, saying that they had last been in Manila more than a year and a half ago. She also introduced her adaptation of an Asian song.

She introduced her song, the only one in the set that she performed that has lyrics. “It tells the story of how I learned not to be afraid of who I was and I got told so many that what I did, that playing the violin and dancing just would never work, and I wasn’t good enough. That I wasn’t marketable. But I believe that by doing what you love and by persistent, that we can accomplish anything. You guys helped me do that. The only one who can really limit your potential is yourself.

So this song is about self-discovery, it’s about learning to love yourself and being who you really are. It’s about breaking free. It’s called ‘Shatter Me’. Thank you very much, Philippines! You guys are amazing!”

After the haunting and beautiful song, which had Lindsey skipping and twirling onstage, she waved goodbye to the crowd at 8:38 pm.

At 8:55 pm, a countdown started on all three video screens, from 05:00. The accompanying music, heavy on strings and drums, changed every few minutes, heightening the crowd’s excitement. More and more people started coming inside. Starting at 0:59 the loud cheering escalated to a deafening level, then the display stopped at 0:00. Even after the stage had turned completely dark, the fans roared in unison.

Finally, the lights illuminated the stage to reveal the entire band. Lead singer Brandon Boyd, in black pants, gray long-sleeved button-down shirt with a white sando inside, had his wavy hair down and framing his face.

He stood in the middle of the stage as the first notes of “Wish You Were Here” filled the MOA Arena. He moaned and hollered with microphone in hand and the crowd screamed.

The stage was awash with laser lights and the video screens were lit up with alternating graphics. People were singing along as Boyd, shaking his percussion, led the crowd.

With characteristic nimbleness, the entire band, led by Boyd, drove the audience to get on their feet and jump to “Anna Molly” and dance.

At this point, Boyd says “Nice to see you,” and smiles. This guaranteed shrieks from members of the audience.

For “Adolescents”, Boyd accompanied with his usual tambourine, as lead guitarist Mike Einziger, dressed in a long-sleeved button-down shirt, showcased his fast fingers and wide range. The background video graphics of cameras and then, a cassette tape moved the emotionality of the song. Einziger launched into an amazing and long bridge on his instrument.

“Thank you very much,” was all Boyd had to say to get a roaring response from the crowd.

A guitar intro solo ushered in “Made for TV Movie.” Boyd, so moved by the song, sat on the stage floor on two separate occasions.

A lull and darkness enveloped the stage and crowd for a few seconds before the haunting strings of Einziger softly wailed again.

“Manila…” Boyd said in a sultry voice. This time, a surprise, as the band launched into a high-on-guitar-strings sample of the Lionel Richie hit “Hello”, as if it were a jam initiated just on the fly. The stage was adorned with lines of red and blue lights.

“Thank you,” Boyd says after the short snippet. The audience screamed their appreciation back.

Then, Boyd enunciated “Manila” and the crowd cheered. He said it again, with the same effect, then: “I’ve said that so many times in my
life but it never felt so good. It rhymes with ‘vanilla’. One of the greatest things in the world.” Of course, the crowd responded with more screams of delight.

“Hey, you know, how about a new song for you?” At the first notes of “Absolution Calling”, again, the crowd went wild.

“We go backwards in time to play an old song.” Green laser lights extend from the stage floor to the Arena’s high ceiling. The band played “Vitamin” with Boyd tapping on a bongo drum and punctuated with strong electronica feedback. The acoustics filled the hall as drummer Jose Pasillas accompanied Boyd and they did a long drum jam showcase.

Someone from the audience shouted a birthday greeting to bassist Ben Kenney. “Yeah, happy birthday, Ben Kenney!” Boyd greeted him. “I just heard someone over there go: Happy birthday, Ben!” He continued, imitating a flirty girl’s voice. Pinoys sing the happy birthday song in unison for him. Boyd pointed to Kenney, who was wearing a black shirt and black hat, saying: “There he is! How old are you?” The celebrant said, “I just turned 25,” eliciting cheers from Pinoy fans.

As the chords for “Dig” started, the fans screamed. Then, as Boyd started singing, they sang along. Suddenly, Boyd’s button-down shirt has been unbuttoned to reveal that he had a white sando underneath. I heard a girl in the crowd scream: “Take off your shirt!”

Drums ushered in the song “Circles”, with Pasillas, dressed in a sleeveless shirt that showed off his tattoos, and a cap, beating on drums and cymbals and drums, and Boyd, also on a drum. Dressed in just his white sando, Boyd started singing.

“We’re going to play another new song for you right now. This song’s called ‘Trust Fall.’” Strong on synthesizers, the song had Boyd jumping around while singing.

Heavy on the guitars, “In The Company of Wolves” is a mellow song that had in the background, video that reminded this writer of bubbles and holiday lights. It is the kind of soft song that this rock band pulls off so effectively.

It was followed by the rock number “A Kiss To Send Us Off”…leading up to an imminent end to the concert. “Nice To Know You” had everyone in the Arena on their feet and singing along with the chorus.

The song “Sick, Sad, Little World” features strong guitars and drums. Boyd went into his liquid falsettos and elicited shrieks from the audience. As he sang intensely, Boyd tied his hair up. Kenney, while playing the bass, jumped and spun around.

Another huge hit, “Drive”, had the audience singing in unison and, during the chorus, Boyd pointed the microphone at them and they sang a capella, smooth and strong.

Someone shouted “I love you!” from the audience. Boyd quickly answered: “I love you, too.” Then he launched into a few lines: “Love…it’s a curious thing… come aboard…”

As he started with the opening lines: “A decade ago…” fans howled.
“Pardon Me” had them singing with Boyd’s soulful lyrics. The song
climbed in intensity as people start jumping and DJ-keyboardist Chris
Kilmore did a round of scratching, complete with dreadlocks flying.

Quietly, with his back turned, Boyd (finally!) took off his sando and revealed his recognizable tattoos.

The song’s instrumental intro of guitars and percussions reverberated. “Megalomaniac” started, with Boyd banging on his drum with such fervor. As the song escalated, all the band members were jumping while playing their instruments. There was some scratching, drums, and guitars. People started clapping in unison and the long instrumental bridge was met with hoots and cheers.

As the video wall showed a closeup shot of Boyd’s intricate ink covering most of his back, the crowd went wild. At the lead singer’s signal, the audience sang a capella again, without missing a beat.

The crowd members waved their goodbyes and walked off the stage. But even as they did, the audience screamed for more.

The members of Incubus disappeared from view and onstage walked more than a handful of stage hands about to clear the stage. Individuals shouted “More!” and “We want more!”

It was only after the whole crowd start chanting “We want more!” for more than a minute, it seems, did the band members come onstage one by one to launch their encore.

First up was “The Warmth,” that is high on the electronica. People were on their feet, singing and screaming.

Einzinger changed his guitar with the help of an assistant, to start the rock love song “I Miss You”, for which this writer is especially thankful. The audience sang to practically the entire song. On the video wall, the camera panned to reveal concertgoers either lipsynching or belting it.

Einziger changed back to his previous guitar for what would be the real last number for the night. Brandon Boyd, before commencing it, said: “It’s been a blast, boys and girls. Thank you so much!”

And so, “A Crow Left of the Murder” transitioned into their rendition of the Beatles’ “I Want You (She’s So Heavy)” was their last, uproarious, and crowd-pleasing piece for the night.

Members of Incubus threw their picks and drumsticks for lucky Filipino fans.

At 10:49 pm, Incubus Live in Manila is over. The house lights were turned on, and the audience members queued to the exit, accompanied by the song “Don’t Stop Believing” by Journey.

Celebrities spotted among the audience were Antoinette Taus, Mara Lopez, and the Eigenmanns: Andi, Geoff, Ryan, and Sid Lucero.