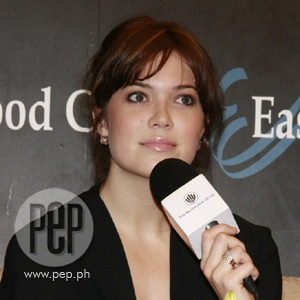 It was a long wait but for the fans of singer Mandy Moore, especially those who weren't able to see her personally in 2003, it was all worth it.

A sizeable crowd, composed of the members of the press and fans, crowed over the statuesque Mandy during a chaotic press conference held at Richmonde Hotel in Ortigas Center last March 12.

Mandy openly reciprocated the adulation by being as enchanting as ever. She was all smiles and very accommodating. The American pop singer even answered questions about her relationships, which was a definite no-no during her first sojourn in Manila.

"Yeah. I remember that," Mandy said about her relationship with Filipino performer Billy Joe Crawford (who insinuated in another interview that KC Concepcion is a better kisser than Mandy). "But I don't even think it as a relationship...it was so long ago...we were practically kids. We didn't even get to go out without our respective chaperones."

And how about Andy Roddick? "Yeah, we email sometimes...we chat but that's just about it." Andy is the professional tennis player who used to be Mandy's boyfriend.

As for her relationship with her Filipino fans, Mandy says she always has a soft spot for Filipinos, whom she said gave her a wonderful reception when she first visited the country.

"I love it here. As an audience, you guys are really great and I appreciate that," she said as a whirl of flashbulbs and mobile phone cams clicked all around her.

This mutual love continued during her concert at the newly refurbished Eastwood Central Plaza where organizers made a unique, 2,500-seat ampitheater for the Hollywood idol.

Singing songs from her current album, Wild Hope, among many others, Mandy made her fans quite happy, with almost everyone singing along with her, particularly during the more famous numbers, like her popular cover of Rihanna's "Umbrella."

Though the concert was short, lasting about an hour or so, all who came deemed it a night to remember, saying that Mandy is as entertaining as ever, although some wished she had sung more of her old hits.

Mandy's visit coincided with what Eastwood City referred to as a commitment to "Seven Days of Laughter," which aims to bring habitues entertainment and leisure 24/7.

The concert falls under Eastwood's world-class concert series, which is meant to cement the idea of Eastwood City not just a place to shop and dine but as home to artists of international renown. According to Eastwood representatives, the Mandy Moore concert is just the first of many to come.

Asked her if she now prefers acting as opposed to singing and writing music, Mandy confidently remarked: "If I were to pick one, I'd still go for music. It's what I love best."