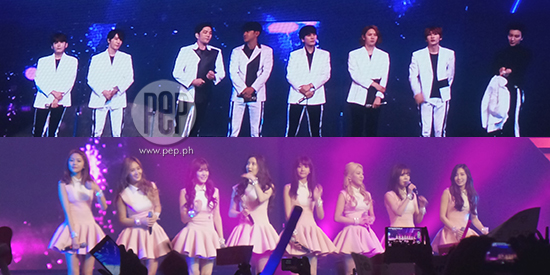 Thousands of concertgoers flocked the Philippine Arena in Bulacan on Sunday afternoon, April 12. Most of them were dressed-up in their best Kpop-inspired outfit for the concert organized by IndiEvents, Inc. and presented by Globe Telecom.

This is the first time for the SM Entertainment’s rookie girl group to visit the country and they were amazed by the warm reception they received from their Filipino fans.

After introducing themselves, Wendy told the audience, “It’s our first time in the Philippines!

“Thank you so much, guys! It’s great! You guys are great!”

Joy added through a translator, “The energy is so intense! We’re so surprised!”

After a short break, Red Velvet continued their performance with “Something Crazy,” “Candy,” and ended their set with their debut single “Happiness.”

The crowd cheered all throughout their performances and the members expressed their gratitude for their fans’ support.

Joy said, “I know you’ll all be cheering so hard. Thank you so much!”

BTOB. Seven-member boy group Born to Beat, also known as BtoB, captured many hearts after Red Velvet’s set. This is the second time the band visited the Philippines for a concert following their stint at the Dream Kpop Fantasy Concert 2 last year.

The group—composed of Sungjae, Changsub, Peniel, Eunkwang, Hyunsik, Dong-geun, and Ilhoon—performed the songs “Thriller” and “Irresistible Lips” for their opening number.

BTOB is also present at Best of Best Kpop Concert! Did you guys miss them? #BestofBestPH2015 #BestofBestKpopConcert

Ear-deafening screams filled the arena as the group greeted the audience by saying “Mabuhay Philippines!”

Peniel told Filipinos on behalf of his bandmates, “It’s been a while since we’ve been here but we’re really glad that we’re finally here with you guys. We really missed all of you guys!”

The singer then asked the audience, “Did you guys miss us?”

Pinoy Melodies (fan cub name) were more than eager to answer Peniel’s question and screamed “Yes!” at the top of their lungs.

BtoB continued their set with “I Only Know Love,” “Lover Boy,” “2nd Confession,” and “You’re So Fly.” Before making a final bow, the band performed their popular hits “Wow” and “Beep Beep.”

This is the group’s second time in the Philippines after headlining the DKFC 2. Also, this is the group’s first time to appear on stage for their Filipino fans with only eight members since Jessica’s departure from the group early this year.

Girls’ Generation opened their stage with the Japanese version of their 2011 single “Mr. Taxi” followed by their massive hit “Tell Me Your Wish (Genie).”

After their opening number, the members greeted the audience.

Hyoyeon told their fans, “Hello Philippines! Long time, no see!” Tiffany also greeted fans by saying, “It has been so long! Hi guys, how have you been?”

The members continued their performance with the songs “Gee,” “Hoot,” and “Complete.”

Before their final song, the members gave a short message to their Filipino fans.

Seohyun told the fans with the help of a translator: “It’s been a while since we’ve been in Manila and we’re so happy to be here.

“The energy you’re giving us, we’ll be taking back home with us.

"Thank you so much! We love you Philippines!

Yuri also promised that they will visit the country again to perform for their Filipino fans. Thee group ended their set with their 2014 chart-topping hit “Mr. Mr.”

Finally! Super Junior is back in the Philippines! We're missing Shindong and Sungmin but we're happy to see the rest of the members perform live! Who's your "ultimate bias" from the group? #BestofBestPH2015 #BestofBestKpopConcert

Pinoy ELFs (fan club name) waved their light sticks tirelessly while screaming to show support for the group. Super Junior opened their set with “Shirt” and “This Is Love.”

After their opening number, the members of SuJu introduced themselves and greeted the fans. Kangin said that the concert reminded him of their solo concert titled Super Show. The singer continued with a short message and told the audience through a translator, “It’s so nice to see you and let’s all have a great time tonight.”

Siwon added, “We missed your voice! Did you guys miss us?” Their ecstatic fans answered “Yes!” and screamed to express their how they missed the group.

After their short intro, the group continued with their set with “Evanesce.” Kyuhyun performed a solo track titled “At Gwanghwamun” followed by Eunhyuk and Donghae’s “Oppa Oppa.” Ultimately, Super Junior ended the concert with the song “Mr. Simple.”