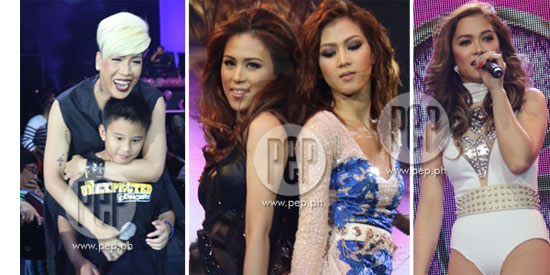 Vice Ganda and Bimby (left frame) were among the guests present at AG From the East: The Unexpected Concert. Alex Gonzaga had a showdown with her sister Toni as well as Maja Salvador (right frame).

It was truly a night of unexpected events when Alex Gonzaga held her April 25 concert at the Smart Araneta Coliseum titled AG From The East: The Unexpected Concert.

The 27-year-old TV host-actress experienced a wardrobe malfunction when her bra suddenly peeked out from her blue midriff top.

As the night progressed, it became a running joke as Vice Ganda teased Alex for being flat-chested while Toni said that their mother, Mommy Pinty, was upset because her daughter’s underwear was seen by the public.

During the first portion of the concert, Alex wore a blue midriff top as she performed songs from her debut album I Am Alex G. While singing her song “Panaginip Lang,” she asked one of the back-up singers to fix her top but to no avail. The unexpected happened: her bra slipped down, allowing concertgoers to see her nude-colored bra.

She tried her best to fix her bra as she continued singing but the cups remained visible to audiences. Floor directors tried to come to the rescue by fixing her top as Alex kept right on singing. After several minutes, they decided to cover her up with a leather jacket. However, the bra cups still slid down and became visible underneath her black leather jacket.

Despite having a wardrobe malfunction, Alex was unstoppable from entertaining fans and concertgoers at who attended her Big Dome concert that lasted from 9 p.m. until midnight.

Alex asked Vice Ganda, who was seated in the audience area, what he thought about her previous production numbers.

The comedian said that he was late so he did not see the previous numbers but he did watch the one where her bra became visible.

Their banter had the crowd in stitches.

In another portion, Alex was also not spared from teasing from her older sister Toni.

The soon-to-be-married Toni told Alex that their Mommy Pinty was mad because of the bra malfunction.

Toni then revealed that their mother is always concerned about the outfits that they wear. “Alam mo yung mommy namin laging ganyan.

These conversations drew so much laughter from the audience that resonated in the whole Big Dome.

AG FROM THE PHILIPPINES. The Unexpected concert last Saturday started with a VTR showing a deglamorized Alex cleaning the Big Dome in preparation for the big event.

For her opening number, Alex came out in a silver, sparkling dress as she sported a high-ponytail hairstyle, similar to the look worn by American singer Ariana Grande.

She then performed a medley of Ariana’s songs “Break Free” and “Problem” as she did the singer’s signature dance moves.

She then greeted the audience just like an international artist.

“I’m so tired Manila! Give me water.”

She instantly shifts back to being Alex.

“Actually this is not Manila. Hi Cubao! How are you Cubao?

“Did you enjoy my first song? Because that’s my second to the last song, so I hope you did,” she jokingly told the audience.

She recalled the sacrifices that she did to prepare for her Araneta concert.

“Alam niyo ba, before the show, I did not talk or anything. I was just myself.

RECALLING HER EX-BOYFRIEND. One of the highlights of the evening was the time when Alex shared her realizations about her love life, which is actually related to her next set of songs.

She continued talking about her ex-boyfriend whom she did not name.

A grand piano was then put on the stage to serve as her prop for her next performance, which is inspired by Ariana Grande’s performance with David Foster during her Honeymoon tour.

Alex then declared: “I will now unfold to you my deepest secret, my voice.

“It’s a secret that I haven’t been telling people but Kuya Jimmy, our musical director knew it, because of our rehearsals narinig niya.

She then dedicates the songs to herself! “So my next song, it’s dedicated to myself. I dedicate it to myself and if you know the song, please don’t sing it with me. Appreciate it. Because this is music, what I'm giving you.”

She then gives a soulful rendition of Ariana Grande’s love songs: “One Last Time” and “Love Me Harder.”

LOVE ADVICE. In the next segment where her wardrobe malfunction happened, Alex came out wearing a sparkling blue midriff top that exposed her tummy area. Despite the malfunction, she continued singing cuts from her album: “Panaginip Lang” and “Bye Bye Baby.”

After the performance, Alex actually became a saleslady!

She went down the stage and pulled a trolley containing copies of her album, I Am Alex G, and her book Dear Alex, Break na Kami, Paano?!? Love, Catherine. She quipped, “Mall show talaga ito, guys.”

They asked an audience member to consult with them regarding love problems.

The TV host-comedian again channeled his persona as Madam Bertud by dispensing advice to a lesbian having problems with her girlfriend.

THE VOICE SHOWDOWN. The next segment featured Alex with two The Voice PH divas – Klarisse de Guzman and Leah Patricio.

As the V-reporter of the talent search, Alex used to monitor the comments made on social media regarding the performers.

Klarisse then answered, “Siyempre ikaw.” Before proceeding with the showdown, Alex first asked for salabat, she gargled right there on stage and spit out the ginger tea in a tabo!

Alex and Klarisse performed “To Love You More” together while Alex and Leah had a duet for “I Have Nothing.” What made the segment hilarious what the fact that when it came to the high notes, Alex would simply point at the two singers so they would sing the difficult portions!

MAJA THE SINGLE LADY. Another highlight of the evening was when Alex had a Beyonce medley sing-and-dance showdown with fellow ABS-CBN talent Maja Salvador. During this portion, Alex changed her wardrobe at least four times, one of which was a bellydancing dress.

They ended with Beyonce’s hit “Crazy in Love.”

After their dance showdown, Alex said that she forgot to add a song suited for Maja.

The band then played the Beyonce hit, “Single Ladies,” alluding to the fact that Maja has ended her relationship with Gerald Anderson.

Without missing a beat, Maja replied in an upbeat tone, "Maganda."

Maja pointed out that she made a slight mistake earlier.

Alex then praised her friend, “Ang ganda-ganda ni Maja. You’ve never been this happier, this beautiful, and single. I’m so happy may kasama na ‘ko.”

GUY POWER. The guys in the life of Alex made their presence felt through their song numbers.

A jukebox set was then brought out onstage, signaling the arrival of her next guest – her Kara-okay partner Luis Manzano who was wearing a Barong Tagalog. Luis sat down onstage “para swabe lang” while singing Ed Sheeran’s “Thinking Out Loud.” He got a negative score of -02! Alex showed her flair for theatrics when she had lifting stunts for “Let’s Get Loud.”

SISTER ACT. The biggest showdown of all was reserved for the Gonzaga sisters.

Alex started singing the theme song of the animated film Frozen “Let It Go” when suddenly, her sister Toni came out on stage to help her finish the song.

Since she entered showbiz first, Toni recalled that her younger sister would always be so supportive of her when she performed in big venues such as the Araneta Coliseum.

“Before ‘pag may show ako dito o kahit sa’n mang show, alam niyo kung nasaan si Alex? Nando’n sa side, magpi-picture, ta’s sisilip. Before I would always say, ‘Cathy pahinging tubig’, ganyan. And you always share the stage with me. But tonight, you owned the stage.”

Alex then disclosed that she wants to be the singer for the wedding of Toni to Direk Paul Soriano.

The younger Gonzaga then gave a comical rendition of “Ikaw” as she played a ukulele, drawing laughter from the audience.

Toni, who was trying to hold back her laughter, marched slowly as if walking down a church aisle until she finally said, “Si Alex ang maid of honor ko pero pagkatapos ng gabing ito, parang puro dishonor ang dala niya.”

If she will be her sister's wedding singer, this is how Alex will sing Toni's bridal march! #AGFromTheEast #TheUnexpectedConcert


The Gonzaga sisters then changed into sexy outfits for their performance of “Bang Bang.”

When Alex went backstage, Toni was left behind to share some “unexpected” stories about her sibling.

But what makes Toni proud of her younger sister is the confidence that she always exudes.

For her finale, Alex wore a skin-tone outfit that was equipped with a harness.

She fulfilled her promise of doing a “buwis-buhay” number by singing “Chandelier.” At one point, she was spun around by a backup dancer.

Alex ended the number by being suspended high up in the air!

As she was hanging from the ceiling, she thanked everyone who watched her Unexpected concert. “Thank you so much! Maraming salamat mag-ingat po kayo pauwi. Pumapayag talaga ako na ‘yan na last song ko.”

Finally, her harness was lowered so she could sing her final song “Blank Space.” As midnight approached, Alex ended the concert comically by asking the audience to go home already as pink confetti fell down from the rafters.