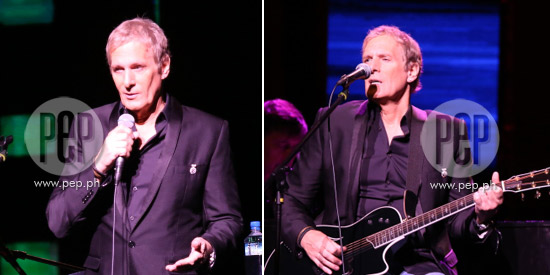 An Evening with Michael Bolton included a large body of the American singer’s work spanning more than forty years.

An Evening with Michael Bolton last Saturday, May 30, treated Filipino fans to a large body of the singer’s work spanning more than forty years. Solaire Resort’s 1,740-seater Theatre was practically filled to the rafters!

After a few reminders about taking photos and cellphone use, the house lights were dimmed at 8:30 pm, signaling the beginning of the show. The full band was onstage and the hit Disney movie theme “Go The Distance” began. Drums and lights were synchronized to the music though. Michael’s clear, crisp vocals could be heard as he sang the first part, but the American singer-songwriter was nowhere in sight.

Then, cheering and clapping ensued as Michael walked onstage in black shirt, blazer, and blue jeans.

He took the microphone and greeted the crowd with a serious tone: “Make as much noise as possible. We have a rule about photographs: take all the photographs you want. Just try to get the most flattering light as possible.” This was met with cheers and laughter.

At 62 years old, Michael Bolton looks like he is aging well yet his voice still sounded as youthful as ever. This must have been helped by his steady supply of bottled water between songs.

“We’re gonna start off with something you know very well. This was the first hit from Timeless: The Classics. Feel free to sing along to the verse, the chorus, and the guitar solo.”

With Michael on guitar, at the first strings of “To Love Somebody”, people already started cheering. The audience sang along and during the chorus, Michael improvised with “Sing it to me now, baby!”—further encouraging Filipinos to sing along.

“To love somebody…” He crooned towards the end then he added, “There’s more.”

And continued singing: “To really, really love somebody, yeah…the way I love you…” The entire theatre erupted in applause.

“Thank you! Thank you very much.” Michael looked out at the audience: “You should feel free to sing along. You sound great so don’t be shy. Don’t be shy tonight.

“This song was the second hit that I had that was given to us 20 years before I recorded it by the greatest artist of all time: Otis Redding.” He and the band then proceeded to sing their rendition of “Sittin’ on the Dock of the Bay.”

LOST IN TRANSLATION. Since his songs are released internationally, there are times when foreigners become confused because of certain song titles.

“Now this next song is not a classic yet but I hope it will become a classic soon. There’s an interesting story behind this song. At least, I find it interesting. This song was a very big hit for me in the United States first. Then they released it around the world. In Europe, and a lot of countries where English was the second language, they didn’t understand the title. So they read the song, they looked at it, and said: “Why is Michael saying he loves her but he is lying?” (In a fake German accent.)

“It’s just the title.” People continued to laugh. “It’s called ‘I Said I Loved You But I Lied.’” This version used electronica to provide echo for the first line of the chorus.

After the song, Michael again encouraged everyone: “You can make some noise, that’s alright.” Then, the crowd cheered louder. “There you go. That’s what we like to hear.”

In the audience, a phone rang.

“I’m not taking any phone calls right now, sorry,” he says smoothly. He continues: “This one is a Walker-Arnold masterpiece called ‘You Don’t Know Me.’”

After the clapping died down, Michael said: “Thank you very much! Now, you’re gonna have to make some noise here because this band has been touring the world. We just came from Australia and we had some very, very loud audiences so we’re spoiled rotten. So…feel free to make some noise!”

“This is something that started a long, long, long time ago but I was hearing it as a teenager in Connecticut, in the States, the blues. Robert Johnson gave us this one. It’s called ‘Sweet Home Chicago.’” Michael played the guitar on the very blues-y song.

At 9 pm, Michael introduced one of his band members. “This is JP Doller on the saxophone. JP Doller.” He plays an instrumental, then jams with the band for about 8 minutes before Michael walks back onstage in a dark suit.

“Enjoying my band, are you?” And the crowd replied in unison: “Yes!”

“Good. You should. This is an amazing band, amazing players, great people as well. And we also have an amazing crew. They’re the people who get in here really early in the morning and make sure you can hear us and see us. And they’re the last ones out of the building as well. So one more time for my band and my crew.” The crowd cheered and clapped for the band.

“Not too much, they’ll ask me for a raise by the end of the show.”

“So, this is a part of the show where we’re gonna do some duets. A couple of albums back, I released a CD called ‘Gems: The Duets’ because…it has duets on it.” This elicited some laughter from the crowd.

“So what I found is that performing these duets is a lot of fun but when I try to sing them by myself, it’s lonely. Fortunately, I have an incredible singer who’s joined us around the world several times already and you might have seen her on the American version of The Voice. She’s killing on The Voice. Her name is Amanda Brown. The incredible Amanda Brown, ladies and gentlemen!”

“I got some sleep last night.”

“Nice,” Amanda replied, while taking her place next to Michael.

“It really does,” Michael then addresses the audience again. “So we’re gonna perform something from the Duets CD that was actually made into a number one record by Adele. You know Adele, right?”

Amanda began the song with a clear, clean vocal and they performed the duet beautifully. At the end of the song, the audience cheered loudly.

“Now, this next song was a very big hit around the world, fortunately for me because it was the first hit song that I wrote for another artist. And I started writing songs for other people because… food is so good.

“I was signed when I was sixteen to CBS Records, but I didn’t have a hit til I was 34. So that makes me an 18-year overnight success story.” At this point, people laughed. “It wasn’t funny back then. And some friends of mine who were songwriters said, while you’re working on your solo career, why don’t you consider writing for other people? And so, since then, I’ve had songs recorded by Kiss and Cher and [Barbara] Streisand and even Kanye West and Jay-Z. And I’m really glad that this happened because in 1983, Laura Brannigan recorded this song of mine, and delivered this beautiful performance, and became the first hit. And it was really great because…food is so good.”

“You know this song quite well, so feel free to sing it to us. Sing the verse, the chorus, the solo, the drum parts—whatever you feel like singing. Just take over. Brian BeckVar is on the piano.”

As the opening notes to “How Am I Supposed To Live Without You” were played on the piano, people started cheering.

“Brian BeckVar has got my number!”

Throughout the song, the audience sang along, and the singers got their participation by pointing the microphones toward the crown for the titular line.

“Take over. Thank you.” Someone in the crowd shouted, and Michael replied: “I love you too, whoever you are.”

Someone else from the audience shouted: “I flew all the way from LA to see you!”

“I’m sorry, what was that now?” And the person said it again.

“You flew from LA to Singapore?”

People laughed as Michael tried to understand the lady.

“You flew all the way here? You flew to Manila for the show?”

“Oh, thank you so much. That’s a long way to travel. I hope you’re enjoying it.”

“Excellent. I’m sorry, I misheard you. It sounded like this. (Michael talking gibberish and in a muffled voice.) But we’re very glad you’re here. So, we’re gonna do something now that is… Well, it was the music of a lot of ours, of our youth, all the way around the world. It started in Detroit, in the States. In a place called Hitsville, USA. That’s where Motown was born. Motown. When I heard this song, it was being performed by Marvin Gaye and Tammi Terrell… It’s called ‘Aint No Mountain High Enough’!”

Amanda and Michael performed a rousing rendition, with people dancing and clapping in their seats.

“Now, we’re going to do a song that was written by a really close friend of mine, whom you know quite well, his name is David Foster.” People cheered at the mention of the musical genius’ name. “David has written a lot of hits and produced a lot of hits and I love working with him, he’s a genius. But I really believe this is his absolute masterpiece. It’s called ‘The Prayer.’”

Their voices blended so perfectly and this, a crowd favorite, had the audience cheering for an extended amount of time.

“Thank you! Alright, Manila. Amanda’s gonna sing a little bit of a medley for you of some hits that I think you know quite well. I will see you in a moment. Enjoy!

At 9:27 pm, Amanda started performing a medley of Michael’s songs: “That's What Love Is All About”,
“Missing You Now”, and “When I’m Back On My Feet Again”. It was very interesting to hear a female version of the hits, so well-loved by many romantic Filipinos for generations.

Then, suddenly, on an apple box in the audience area, dressed in a black shirt, scarf, and jeans, Michael started singing his monster hit ‘When A Man Loves A Woman’ with a spotlight trained on him. In the middle of the song, he walked back to the stage.

Then, the entire band goes into “How Can We Be Lovers?” featuring an amazing guitar riff.

Lights and sounds fill the theatre as “Time, Love, And Tenderness” was performed.

Then, Michael started saying “Thank you!” and waving goodbye at 9:47pm. The rest of the band started to leave even as the crowd continued to cheer, clap, and shout: “More!”

After three minutes and continued shouting and clapping, the band took to the stage for the encore performance. Michael walked onstage wearing a black blazer over his previous ensemble.

“I told you we loved to hear some noise. Thank you!” He then proceeded to introduce the members of the band.

“This is a song I wrote with Bob Dylan.”

Michael Bolton Live at The Theatre @ Solaire Resort & Casino ended with a soulful “Lean On Me.”