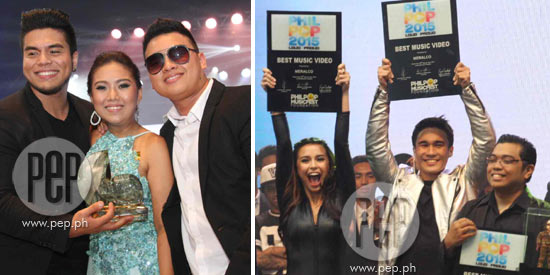 This 2015, the duo of DJ Thyro Alfaro and Yumi Lacsamana duplicated their 2013 win at the Philippine Popular Music Festival, popularly called PhilPop.

Their 2015 entry, "Triangulo," performed with Jeric Medina, bested 11 other entries in the 4th edition of this songwriting competition.

The awards night was held on July 25 at the Meralco Theater and telecast later over TV5.

Thyro and Yumi had previously won for their entry to the 2013 PhilPop with their song "Dati," which went on to become a certified hit.

The programme opened with an energetic medley of disco-era OPM hits performed by Dingdong Avanzado and Mark Bautista, featuring a rap number by Andrew E, with Jennifer Lee as DJ and 2014 World Hip Hop Champions, ATeam.

Mark interpreted the winning entry during the 1st PhilPop held in 2012, "Bawat Hakbang" by Karl Villuga.

The performances followed this sequence:

"Paratingin Mo Na Siya", an upbeat and cute song by Davey Langit that he interpreted on guitar with girl group Baihana.

As a love song to his wife, Ned Esguerra wrote "For the Rest of my Life." OPM legend Side A gave it a jazzy interpretation.

Another intense performance was of "Sa Ibang Mundo" by Nadine Lustre and Kean Cipriano, who jumped all over the stage. It was penned by Mark Villar.

Jinky Vidal gave justice to the quirks and range of the song "Kilig" by Australia-based Soc Villanueva.

Jon Santos owned the stage, complemented by dancers, for his performance of "Apat Na Buwang Pasko." The tongue-in-cheek song was composed by Gino Cruz and Jeff Arcilla.

The CompanY showcased their acapella supremacy during the first part of the song "Tanging Pag-Asa Ko" by Paul Armesin. Dressed in all-white ensembles, their voices, the spotlights, and the large amount of fog onstage all set the stage for the heavenly inspirational song.

"Edge of the World" penned by Johann Garcia was performed by Josh Padilla and girl-suspended-with-harness Yassi Pressman.

This year's theme was "Philpop to the World." The night coincided with the first celebration of Linggo ng Musikang Pilipino, declared through Republic Act 933, signed into law by President Noynoy Aquino in December 2014.

The rich harvest of original songs certainly proves that Philippine music is alive and thriving. As Mark Bautista aptly put it: "PhilPop is not a singing competition. It is a songwriting competition."

A tribute and throwback to OPM was performed by musical stalwarts Maestro Ryan Cayabyab, Noel Cabangon, and Ogie Alcasid.

Fans of the songwriters as well as celebrity interpreters brought banners to show their support for their idols.

He was referring to the fact that the loveteam composed of James Reid and Nadine Lustre performed for competing entries.

They only shared the stage before the announcement of winners. James looked edgy in his hiphop outfit while Nadine looked feminine in her sparkly ballerina-inspired dress with tall, white, wedge-heeled boots. 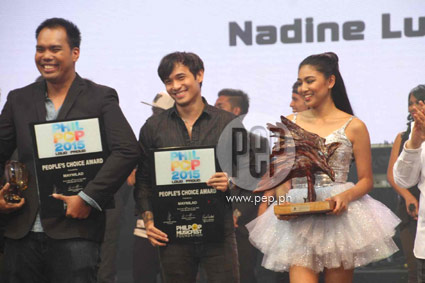 The special awards were distributed first. The awardees received P100,000 and a plaque of recognition each. The People's Choice Award went to "Sa Ibang Mundo" by Mark Villar (intepreted by Kean and Nadine).


The Best Music Video award went to "Edge of the World" by Johann Garcia, directed by Nolan Bernardino.

This composition was interpreted by Yassi Pressman and Josh Padilla, the son of ‘80s singing idol Gino Padilla.

This marks the first time that PhilPop handed out a Best Music Video award in the four years that it has mounting this songwriting competition.

First runner-up was awarded to "Paratingin Mo Na Siya. by Davey Langit, who also received P500,000. The Grand prize winner and recipient of the P1 million cash prize was Triangulo by Thyro and Yumi.

This year, 2,500 submissions from amateur and professional composers came from the Philippines, the United States, Canada, Australia, the Middle East and other Southeast Asian countries.

The executive committe then narrowed the list down to 12 finalists.