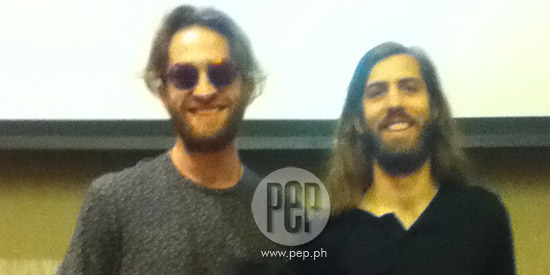 Imagine Dragonsï¿½drummer Daniel Platzman (left) and guitarist Wayne Sermon reveal that they have been working on some songs during their stay in the Philippines.

Grammy Award-winning band Imagine Dragons is now in the Philippines for their one-night-only concert at the Mall of Asia Arena.

Prior to their August 27 concert, PEP.ph (Philippine Entertainment Portal) and other media outfits had the chance to interview members of the band responsible for the hit singles “Radioactive” and “It’s Time.”

Since the band formulates most of their songs on the road, it’s possible that ideas for future compositions may have come to them during their brief stay in the Philippines.

“I’ve actually been writing a demo in my hotel room today. I know Dan [Reynolds, lead vocalist] has been too,” revealed Wayne Sermon.

Daniel Platzman also admitted, “I have also been working on my own.”

Is their new work related directly to the Philippines? Perhaps the traffic they’ve encountered outside?

“Nothing that literal,” Daniel assured fans.

“It’s always something subconscious,” Wayne explained. “Usually when we go to places, it’s more like a feeling.”

“It’s a little more abstract than writing about traffic,” the drummer continued.

“Like how a city or a country makes you feel,” the guitarist explained.

What feelings were evoked during their stay in the Philippines?

“It’s really cool,” said Daniel. “I know there’s a lot of islands and I know we’re not going to have a chance to get on a boat and check out the beaches but..."

Wayne continued, “We actually got to experience a little bit of Philippine culture last night.”

“We went out to a really good dinner. We actually had the balut.”

Daniel described balut (fertilized duck egg) by saying, “It was delicious. It was a little intimidating but it was great.”

Wayne quipped, “As long as you don’t look at it right in the eye!” His joke elicited laughter from the small group.

What are their other impressions about the Philippines?

“While we were in traffic, we got to see the jeep,” recalled Daniel.

“Yeah, the public transportation,” the drummer agreed. “We’ve never seen anything like that and we thought it was great. It was so cool.”

“There were so packed,” said the guitarist. “I love how short they are.”

“We were trying to imagine our parents getting into them,” Daniel mused. “I wonder how my dad would be able to get into that.”

“Culture experiences like that, getting to see the world, that’s what it’s all about,” Daniel stressed.

Daniel said with a smile, “To travel to place you’ve never been to before, for a packed crowd singing the words at you, it’s pretty indescribable.

“It makes us feel like we need to work harder, that we need to be deserving of this success that’s right in front of us. It’s really staggering, especially when English isn’t the first language.

“In Tokyo, 10,000 people were singing the words at us and I was blown away. I just couldn’t believe it.”

Imagine Dragons can now add the Philippines to the list of places where their adoring fans could scream their adoration for the award-winning band.