Michael Learns to Rock member tells Filipinos: “We remember the way you guys can sing.” 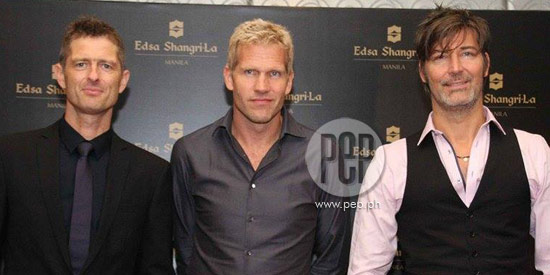 Michael Learns to Rock is composed of (L-R) drummer Kare Wanscher, singer and keyboardist Jascha Richter, and guitarist Mikkel Lentz. They look forward to singing along with their Pinoy fans during their Philippine concert at the Araneta Coliseum on September 19, 2015.

You know their songs—and how can you not, with a career spanning more than 25 years?

Michael Learns to Rock returns to the Philippines after seven long years, to perform again for their soft rock-loving fans this Saturday, September 19.

MLTR is best known for hit songs such as "Paint My Love," "Take Me to Your Heart," and "That's Why (You Go Away)," among others.

Echoing the sentiments of their fans, Kare said, “It’s been too long. We are very happy to be back.”

The members of MLTR met members of the Philippine media during the press conference held at the EDSA Shangri-la Hotel on September 12: a full week before their much-awaited stop on their Asian tour.

“The concerts we’ve done here were very memorable for us. We remember the way you guys can sing,” Kare continued, referencing Pinoys’ love for love songs and loving to sing along.

It seems like almost as soon as the band launched internationally, Filipinos took to their brand of music.

In 2013, the album 25: The Complete Singles was released, with most of the songs that fans the world over continue to love, plus two new singles: “Call On Love” and “Silent Times.” The album is available in record stores as well as online through Spotify.

GENERATIONS OF FANS. During the Manila presscon, Rachel Rose, one of the administrators of MLTR’s Philippine fan Facebook page, brought a sketch of the band made by her niece, 17-year-old Greta Ericka Bantilan.

The three guys were so delighted by the gesture.

The MLTR band members feel like they have been welcomed so many times to the Philippines.

Jascha says: “We have all these wonderful fans, and we can see all the fans from the old days. We now have fans from two generations, at least. We now have them coming to concerts, the parents and the kids.”

Mikkel agrees: “We have a very long history with Filipino fans. They invited us over in the ‘90s, and now they have kids.”

He also commented on the changes in the relationships forged between artists and fans, thanks to technology available nowadays.

“I think the Philippines is the country where we have the most Facebook fans. It’s nice to have direct dialogue with them. We couldn’t do that years ago.”

MEMORABLE TUMBLE. Mikkel admits that sometime in the 1990s, in the midst of a long and tiring tour, he had an accident onstage.

As he describes it, Kare was doing an intense drum solo, and Mikkel got his tambourine and walked on and then offstage—he had overstepped and fell off it, hurting his legs. He says, “We have it on media. But it’s not on YouTube.”


STILL PLAYING ON. Where do they get the inspiration for their songs?

“When we started, it was the 1980s. The inspiration was something else from today,” Kare says. “Our inspiration comes from all the music we’ve heard from our childhood and adult lives.”

Jascha jests: “But we’re beginning to have some problems with the lyrics. We’ve used ‘I love you’, ‘You love me’, ‘I don’t love you’, ‘You don’t love me’… It’s really hard to come up with something new. Maybe next time, it will be about environmental problems…”

Mikkel addressed the question about their type of songs and style of music. “It is very natural. We go to the studio, it just ends up being in the album. Why change it?

“We don’t have a need to adjust to trends.”

But should anyone want to remake their songs, how would they feel? To this, Jascha suddenly does a hip-hop version of “Sleeping Child,” and the two guys quickly follow his lead, impromptu.

Mikkel says: “We’d be honored if someone felt like doing one of our songs.”

SECOND MLTR GENERATION? Collectively, the band members have 12 kids between them.

“Enough kids to form a real big band,” Jascha quips. “Many of our kids have music in their life. They enjoy it.”

Mikkel says, though, it is too early to say whether any of them will follow in their fathers’ musical footsteps. “They are very used to coming with us on the road.”

NEW SINGLE BY NOVEMBER. After revealing that Jackie Chan is a big fan, Mikkel admits that “a lot of people ask us to do duets, but we just don’t have time. It takes a lot of time to rehearse and we are busy traveling as a trio.”

Finally, Kare revealed that fans need not wait long for new songs from the band: “We are recording at the moment. We will soon release new, original material.”

After much prodding, Jascha admitted that their newest single will be released sooner rather than later: November 2015.

What can fans expect from their 2015 Manila concert?

A chance to sing along to their hearts’ content, of course. “We love to hear people sing, we love to interact. It’s going to be one big party for the audience,” Kare assures.

Jascha added that they will play most of the songs from their album 25: The Complete Singles, with a very special set list put together just for their Asian tour.

Michael Learns To Rock will perform live on September 19 at the Araneta Coliseum.