The Click Five performs tonight at the Big Dome 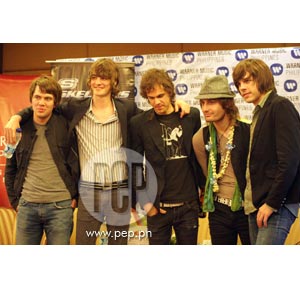 The Boston, Massachusetts based power pop band The Click Five will once again rock Manila as they perform tonight, May 30, at the Araneta Coliseum for their Modern Minds and Great Times World Tour 2008.

When the five-piece American band The Click Five arrived in Manila last year to promote Modern Minds and Past Times, there was this prevailing feeling that the band would do a return visit.

Well, they did. And this time they're up for something bigger.

Tonight, May 30, the quintet of Kyle Patrick (vocals), Joe Guese (lead guitar), Ethan Mentzer (bass), Ben Romans (keyboards) and Joey Zehr (drums) will take their brand of power pop music to the Araneta Coliseum. The Manila concert is the band's fourth stop in their 7-city tour dubbed as Modern Minds and Great Times World Tour 2008 which kicked off in Australia last May.

In an interview with local pop magazine Fudge, the band acknowledged the warm reception they received from the Filipinos when they conducted their 3-day pocket concert last October.

"We had a lot of fun here, everyone was very welcoming," said drummer Joey Zehr. "Just all the people who have been showing up for our shows. We're humbled by how many people want to see us play live here. And everyone we've met, from our record label to the radio stations, to the press—everyone was so nice."

The warm reception received by the boys was definitely well deserved. Buoyed up by the songs—"Jenny," "Catch Your Wave," "Just the Girl," "Happy Birthday," "Empty," to the band's latest single "Flipside"—the band undoubtedly is a genuine hit-making machine with a deep understanding of what they are doing.

It didn't hurt also that all members of The Click Five knows how to dress up and exudes remarkable charisma.

The Click Five's Manila concert will also allow their Filipino fans to watch and hear new vocalist Kyle Patrick who took over vocal duties from ex-frontman Eric Dill. Just like his bandmates, Kyle, 21, is also a graduate of the prominent Berkley College of Music.

Looking back anew on the band's first visit, manager Wayne Sharp gladly shared to Fudge, "...as far as the audience's response is involved, it was exceptional. They were all very enthusiastic."

Tonight at the Big Dome, The Click Five hopes to rekindle that overwhelming response from their Filipino supporters.

Catch The Click Five tonight at the Araneta Coliseum together with front acts Rivermaya and Lala.