Charlie Puth of "See You Again" fame wants to work with Bruno Mars "because he’s half Filipino!" 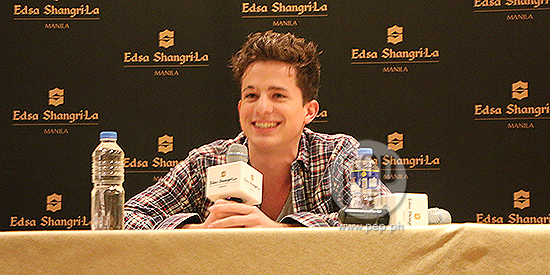 Charlie Puth's message to his Filipino fans: “You all stuck with me from the very beginning and you all know me for quite some time before ‘See You Again,’ before Ellen even, and I just appreciate all the love that I get from you guys. And you’re the reason why all this is happening, why I get to travel the world. So, it’s really my success but it’s really, really all of our success because it’s like a joing team effo

Charlie will be performing live for his Filipino fans during his showcase at Eastwood Mall in Quezon City on Saturday, October 3.

But before his show, PEP.ph (Philippine Entertainment Portal) and other members of the press were able to know more about Charlie during his press conference held on October 2 at EDSA Shangri-la Hotel in Mandaluyong City.

The singer arrived in the country on Wednesday, September 30, and was asked how his stay in the Philippines. Charlie immediately answered, “I’ve been sleeping, just relaxing.”

Since it’s his first time in the country, Charlie was also asked if he was able to try some Filipino food. The singer admitted that he hasn’t tried anything yet but asked his fans what to eat. A fan suggested for him to try pork sinigang and balut.

NINE TRACK MIND. Charlie is now preparing for his debut album, Nine Track MindMind, which will be released on January 22, 2016.

Asked what inspired him to write the songs on his album, he answered, “My year has been crazy and I wanted to make something musical that represented what my year has been like.”

His chart-topping hit “Marvin Gaye” featuring Meghan Trainor will be included in the album along with 10 other tracks.

The lyrics ashave become one of the most popular pick-up lines used right now but do people use it on him?

He answered, “More than you could think, a lot. But ironically, I don’t think they’re serious.

“They’re just bringing that because of the song. If they are serious, that’s fine!”

What was the worst pick-up line he used on a girl?

“It sounds so creepy and weird!”

The 23-year-old singer is currently promoting his new single titled “One Call Away” which he considers his favorite track on his album.

Charlie recounted how he produced the song and said he was suffering from flu a week before going to China when he wrote it. His friends helped him one by one with the lyrics before laying out the melody of the song.

“It was so bad, and I was so sick, and I was just like I just wanted to go to bed,” Charlie said.

“We rented this house in California with five of my favorite songwriters and I just went upstairs and my friend knocked on my door.

“He was like, ‘Hey let’s scrap that idea we were working on before.

His friends also helped him sing the song while they were composing it.

“I had my friend sing it and then, I woke up the next morning and my Dad was like, ‘I think that’s a very special song.’

THE SONGWRITER. The media also asked about his creative process and how he writes his songs. Charlie admitted, “I have to be in places to write music.”

He further explained, "Even though I hate flying on planes, every time I seem to go on planes I always have like an idea for a song.

“Like I have already written three songs up in my hotel room.

“I have a little studio set-up and I’ve got three songs already done because I’m so inspired by the nice people, all the pretty women."

He added, “I’m weird, that’s the only way… I can’t even be locked in a room because nothing will happen.”

Which artist would he like to work with for his next collaboration?

“He’s on my label and I’m bound to meet him, I would love to meet him.

“I just love his whole process of everything. He kind of writes the same way that I write.

“Whatever he’s thinking goes right to the mic and he lays just a melody down.

“There’s no actual writing involved but that’s the same way I do it.”

Towards the end of the press conference, PEP asked Charlie to give a message for his Filipino fans.

“You all stuck with me from the very beginning and you all know me for quite some time before ‘See You Again,’ before Ellen even, and I just appreciate all the love that I get from you guys.

“And you’re the reason why all this is happening, why I get to travel the world.

“So, it’s really my success but it’s really, really all of our success because it’s like a joing team effort so I thank you so much for that!”