Regine Velasquez excited to perform hit songs from Rak of Aegis, Katy! The Musical during her concert series 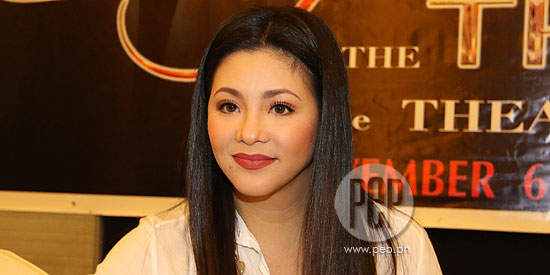 Regine Velasquez on her upcoming concert series: "It's all musicals. Maraming Broadway pero meron din OPM songs. The reason why we wanted to call it Regine at the Theater, we didn’t want to do Broadway songs lang. After all, ang lakas ng musicals ngayon dito sa Philippines."

Regine Velasquez is all set to perform popular musical songs both from Broadway and local theatrical productions in her concert series tagged as Regine at The Theater.

This concert series (which was conceptualized two years ago) will be held at Solaire Hotel and Casino on November 6, 7, 20 and 21.

Regine said she’s happy to be given the chance to focus on her first love: singing.

“Before I used to do this, I would do one major concert in a big venue and then I usually do a series.

The Asia’s Songbird was also happy to say that she can handle doing several shows now that her condition has improved.

As it is, Regine’s throat got affected with her bouts of acid reflux in the past few years.

Veering away from her hit songs, Regine will be performing popular songs from musicals shown in Broadway as well as in local theater productions.

She revealed that she would be singing pieces from Les Miserables and Phantom of The Opera.

“Now for the first time, I’m going to sing ‘On My Own’ (Les Miserables) kasi that was the song I sang when I auditioned for Miss Saigon [in New York].

But more than anything, Regine is excited to perform hit songs from local musicals such as Rak of Aegis and Katy! The Musical (music by Ryan Cayabyab).

At the same time, Regine wants to revive her fond memories of her short-lived career in musical productions, particularly when she starred in Noli Me Tangere in 1995.

Jonalyn Viray and Aicelle Santos will serve as the guests of Asia's Songbird during her concert.

For inquiries and reservations, you may contact SM Tickets at Tel. No. 470-2222.

Regine performs a snippet of "Defying Gravity" from Wicked: The Untold Story of the Wizard of Oz, which is part of the lineup of her November concert.