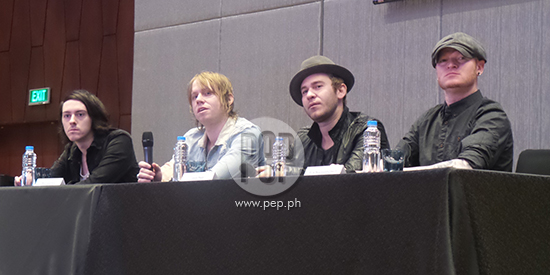 Jason Wade on what Filipino fans can expect from their October 8 concert at MOA Arena: “We’re gonna play pretty much everything that our fans want to hear. And maybe a couple of songs to indulge the side of us that wants, like the more creative tracks. But I feel like nobody gonna walk away from the show if we sing the songs that they want to hear.”

American alternative rock band Lifehouse returns to the Philippines for their concert at the SM Mall of Asia Arena this Thursday night, October 8.

The four-man band—composed of Jason Wade on vocals, Rick Woolstenhulme, Jr. on drums, Bryce Soderberg on bass, and their newest member Steve Stout on guitars—arrived last Monday, October 5, three days ahead of their Manila concert.

Some of the band’s chart-topping hits include "Hanging By A Moment," "You and Me," "Sick Cycle Carousel," "Whatever It Takes," "Spin," "Breathing," and "First Time," among others.

PEP.ph (Philippine Entertainment Portal) and other members of the press interviewed the band during their press conference on Tuesday afternoon, October 6, at the ballroom of Nobu Hotel in Pasay City.

Although three years has passed since the band’s second concert, the members were still able to recall their fondest memories from their last visit in 2012.

Rick recalled, “The memories in the Philippines have always been amazing, cause it is maybe into the one place in the world where we come to and we can play album tracks are not commercial singles, per se.

“People, actually, relate to and it can be gigantic arena that people that can all be in the same place with a song is not commercial single.

What can their Filipino fans expect from their 2015 concert?

Jason initially replied, “We’re gonna play pretty much everything that our fans want to hear.”

The band vocalist added, “And maybe a couple of songs to indulge the side of us that wants, like the more creative tracks. But I feel like nobody gonna walk away from the show if we sing the songs that they want to hear.”

REBIRTH. In 2013, Jason announced their band is taking a break to pursue individual projects. Two years later, Lifehouse reunited and offered a new sound through their seventh studio album, Out of the Wasteland.

The band’s bassist, Bryce, felt that it was creative kind of a “rebirth” for all of the members.

He explained, “The title of the record is Out of the Wasteland because we just released an album independently for the first time.

“We kind of got back to our roots and explored the sonics of the first records that we made, what established our fan base in the first place.

“The two-year break is really healthy for us. We just kind of got a little burned out.

“After 15 years of touring and making records, it got a little monotonous.

“So it’s a really healthy time for us to just settle back and take a break and explore some individual creative things.

“When we got back together and kind of made this record, Jason have like 70 demos and each of us have something creative to bring back to the table.

“So, yeah, it was a really healthy break for us and we’re glad to be back.”

The band is currently promoting their latest single “Hurricane.” How does the band feel now that their new song is being compared to their previous hits?

Jason answered, “I think it’s great, I think we took some risks in our last couple of albums and to be able to kind of be comfortable in our own skin to come up with something that sounds like the earlier Lifehouse is kind of refreshing to us.

“But we always want to keep on pushing the boundaries and make records that are different from the last one.

“We never wanted to be those bands that are just making the same album over and over again but it’s been so long since we explored that sound, that it was kind of nice.”

Aside from their new music, the band also welcomed Steve as their new lead guitarist replacing Ben Carey.

Towards the end of the press conference, Lifehouse gave a message for their Filipino fans.

Bryce said, “We’re playing at the Mall of Asia Arena, I think it’s a 8 pm and we’re just really excited to be here. We love the Philippines, we love the people here, and we really grateful to have the opportunity comeback for the third time and have a really magical evening with everyone."

Jason added, “We love guys! Thank you so much!”