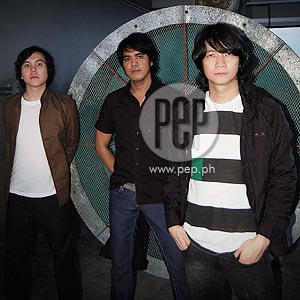 "It's fun. A lot of people believe in us and helping us because they believe in the music. They need something to believe in right now in the music industry," says Clem Castro about The Camerawalls. This indie band is composed of (from left) Ian Sarabia, Law Santiago, and Clem.

"I always challenge myself so it's gonna be different," says Clementine "Clem" Castro about his new indie band called The Camerawalls.

The group is composed of two former Orange and Lemons (ONL) members—vocalist Clem and bassist Law Santiago—while their third member is Ian Sarabia who handles the drumming for The Camerawalls. This indie band gave the press a sample of their music at the album launch of their 10-track debut album Pocket Guide to the Otherworld. The said event took place at Club Dredd, Eastwood City in Libis, Quezon City last July 3.

The songs sounded a lot like British pop mixed with the musical style of The Beatles, which were actually two of the band's influences in making their music. "Nandoon pa rin 'yong British pop influence but we inject Filipino sensibilities sa mga songs," explained Clem.

The Camerawalls vocalist admitted that although they did not intend to sound different from his previous band, listeners might notice some changes with their music. "I try to be different this time. It's not the usual theme of love and sex, not your typical concepts. We're writing songs about moving on and changing jobs, about the bad people in the world; about medical wonders and reincarnation."

These changes, according to Clem, were done because, "We felt that there are so many interesting things we could write about. We want to be socially relevant. At the same time, we felt our music should be more personal."

GOING BACK TO INDIE. Aside from forming a new band, Clem also established his own independent record label, Lilystars Records, to support the debut album of The Camerawalls. This prompted the vocalist to describe the launch of their album as, "Everything is D.I.Y, do-it-yourself."

This move to become more independent seems to have stemmed from the breakup of the band Orange and Lemons. Aside from citing musical differences, Clem pointed out that a shift in musical direction also caused the split up of ONL, which became known for creating the Pinoy Big Brother theme song "Pinoy Ako."

He explained, "They [former bandmates] were not happy with the direction I'm taking Orange and Lemons at that time. We started indie, di ba, then, we went mainstream with the major labels. Then, I think, that affected how they think. The mindset of an artist when you get into major labels and they got consumed by it. Money was coming in so it's inevitable that we would have a clash because of commercialism and direction."

Now that The Camerawalls has released its album under an independent label, Clem hopes that other people won't be able to unduly influence them regarding the music that they want to create. He said, "I don't want to experience again the same thing that I experienced with record labels. I [have] nothing against them kasi I've been told na, ‘We need a ‘masa' song, can you add a ‘masa' song in this line up?' It's really difficult for me to work that way."

Ian agreed with Clem by saying, "Because you put your name on it. It's not like selling glasses. It's also selling your art and personality. You put your name on it, you don't wanna be named as that. We just want to have control over what we're known for, without being tainted by the money."

The band's drummer added, "It's all one-dimensional. It's all about bands being used as a vehicle to sell products or they start out with all the right intention but then they get controlled because the label lends them money and now, ‘You're mine, you have to do this for extra money.' So, the people really suffer because I mean, we could always buy things in other places."

With their new album, the group said that they did not have any expectations especially when they formed together as a band.

"No expectations," said Ian, who also works as the finance director of Vivian Sarabia Optical Corporation. "Hopefully people can dig [our music], you know, but we can't really control what people like."

"As long as we're doing what we wanna do and we're not cheating ourselves or anybody else by making songs just so they sell. I think it'll work out fine, you know. Maybe other bands or other people see it and follow through."

Right now, the 10-track album Pocket Guide to the Otherworld is available in all Music One outlets in Metro Manila. They also sell their records globally by mail-order through their website, www.thecamerawalls.com or www.lilystars-records.com. This indie band is also currently working on ways to sell their music digitally.