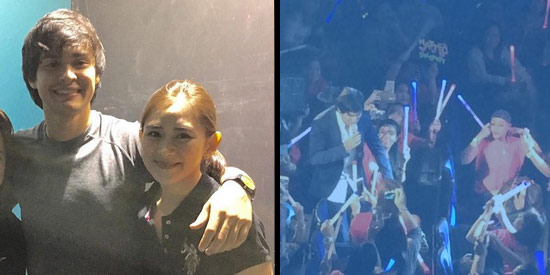 Sarah Geronimo was photographed backstage with her boyfriend Matteo Guidicelli after he concluded his first solo concert titled MG1.

Matteo Guidicelli just fulfilled one of his dreams by staging a concert titled MG1 at the Music Museum on Saturday night, November 28.

“Welcome to my biggest singing audition for you guys,” Matteo told concertgoers after performing a medley of Maroon 5 songs as his opening number.

In one of his spiels during the concert, Matteo admitted he never imagined himself being a singer, not even doing a solo concert.

He said becoming a singer was the idea of his manager, Jojie Dingcong. His first fan was his mom, of course.

To take proper singing lessons, he enrolled in a music class in the University of the Philippines in Diliman, Quezon City, “where I saw Karylle, Sarah [Geronimo, his girlfriend], and other artists.”

He also took up music classes abroad before he started joining concerts, including his most recent concert, Dreamboys with Daniel Matsunaga and JC de Vera.

Matteo recalled, “You know, the last time I was here at the Music Museum, I was performing with the Dreamboys.

“That was fun, but this is crazy! This is the first time I had a show by myself!”

So, for his concert, he introduces himself to the audience as Matteo, the music artist.

“Don't get me wrong, this is just my fantasy,” said Matteo.

“I'm not doing any career change, I'm not even going nuts, I just wanna be myself.

“I've always wanted to be myself and just do what I love to do and what I want to do, and this is it.

“Tonight, I will give you my heart and everything, my soul with all these beautiful songs.”

The 25-year-old actor-singer then performed his latest single, “Ipapadama Na Lang,” which is included in his self-titled debut album under Star Music.

Aside from Maroon 5 songs, Matteo also did other popular songs such as “Shut Up and Dance” by Walk the Moon and “The Man Who Can't Be Moved” by The Script.

Matteo also performed with his fellow Cebuano, Morissette Amon, whom he personally chose to be his special guest in the MG1 concert.

The two young singers had a duet for Ogie Alcasid's “Sa Kanya.”

This is the same song in Matteo's album that he recorded with Ogie's wife, Regine Velasquez.

Matteo and Morissette also performed “Forever” by Martin Nievera, who was Matteo's voice coach for the MG1 concert.

Speaking of Martin, the veteran singer performed his popular songs, which he jokingly said “made Matteo sleep."

“But here's one song he didn't sleep,” Martin told the audiences before singing “Corner of the Sky” with Matteo.

Martin liked Matteo's rendition of this song that he invited him to his upcoming concert at The Theater, Solaire Resort and Casino in Pasay on December 1.


Meanwhile, other OPM hits included in Matteo's concert lineup were Sugarfree's “Tulog na;” April Boy Regino songs such as “Di Ko Kayang Tanggapin,” “Honey My Love So Sweet,” which he sang along with the audience; and Eraserheads's "Ligaya,” “Huling El Bimbo,” and “With A Smile” for his encore.

The Kapamilya singer also gave message about charity and peace this Christmas season by singing John Lennon's “Imagine,” Band Aid 30's “Do They Know It's Christmas,” and Train's “Shake Up Christmas.”


SARAH G ON HIS MIND. Although Sarah Geronimo was not seen in the audience area, Matteo still brought kilig to fans by including his girlfriend's name in the lyrics of the songs he's performing.

For example, while singing Billy Joel's “She's Always A Woman,” Matteo changed some of the lyrics of the chorus.

Instead of singing "She's always a woman to me," Matteo sang sweetly, “She's always Sarah to me,” much to the delight of the audience.

In another instance, the hunk actor-singer changed “Aubrey” to “Sarah” when he sang the popular Bread song.

Matteo also included the song that he and Sarah performed together during his birthday party last year: John Legend's “All of Me.”

Lastly, the audience got excited when he performed his rendition of Sarah Geronimo's recent hit songs, “Kilometro,” which he already did during the Dreamboys concert.

Matteo made it sweeter by telling audiences, “I love that song.”

In previous interviews, both Sarah and Matteo separately said they're not sure if they could attend each other's concerts. Sarah is scheduled to have concerts on December 4 and 5.

The couple have repeatedly said that they want to separate their professional careers from their personal relationship.

Still, Sarah made it a point to support her boyfriend Matteo by being present at the MG1 concert.

After the event, MG1 producer, Vernice Soyangco of Hills and Dreams Events Concepts, posted her photo with Matteo and Sarah, who was backstage at the time.