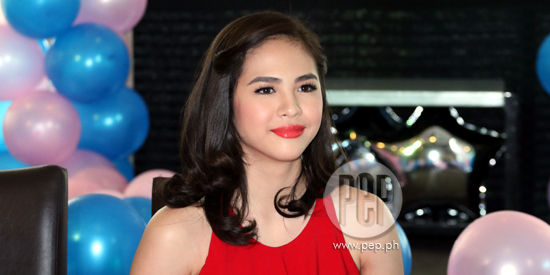 Janella Salvador is grateful for her blessings: the launch of her album, getting the title OPM Pop Sweetheart and the opportunity to interpret the theme of Hong Kong Disneyland's 10th anniversary. She says of her new title, “It’s such an honor to be called the OPM Pop Sweetheart kasi hindi lahat nabibigyan ng title. It’s different talaga. It’s overwhelming."

Janella Salvador reveals she was moved to tears when she learned that she was chosen as the theme song interpreter for Hong Kong Disneyland.

The ABS-CBN teen star says she was initially shocked when Star Music executives told her that she would perform “Happily Ever After,” the song for the theme park's 10th anniversary celebration.

Janella tells PEP.ph (Philippine Entertainment Portal) and other media at the launch of her debut album last December 4, “Actually, ganito yun. We were in a meeting. Then suddenly, they [Star Music executives] told me, ‘Janella was chosen, ha. She’s gonna sing the theme song of the 10th anniversary of Hong Kong Disneyland.’

The song will be included in the limited extended edition of Janella's self-titled album to be released this December.

The 17-year-old singer-actress also shot the "Happily Ever After" music video in Hong Kong Disneyland.

The experience reminded Janella of her first visit to Hong Kong Disneyland, where she celebrated her seventh birthday.

“I hope the music video made you want to go back to Hong Kong Disneyland because it was such an experience. It was...sulit yung pagod. It was really fun, promise.

"I was in Disneyland for five days. As in paikot-ikot ako. Nagbabad ako. It was tiring but it was really worth it. Sobrang fun siya.”

The lead star of Haunted Mansion adds that she was glad to meet Filipinos working in Hong Kong Disneyland when she performed the song live there.

Janella recalls, “The launch in Disneyland was in the Disneyland Resort, sa hotel where it was actually a Filipino Christmas party.

“It was such a happy moment na parang all the Filipinos there were gathered tapos na-launch ko pa yung song ko for Disneyland sa harapan nila.”

Here's the video of Janella's performance at Hong Kong Disneyland:

The ASAP 20 It Girl is grateful for the recognition she's getting.

She told the press, “I always say, it all comes just so fast. I can’t...parang minsan hindi ko ma-absorb na I’ve achieved this already – yung may album. 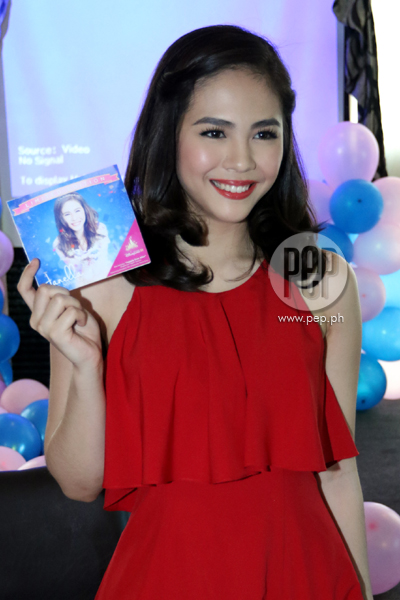 “I don’t know what I did. Hindi ko alam anong ginawa ko para ma-deserve ito, but all I know is talagang in-enjoy ko lang lahat.

“Since I was a kid kasi, I’ve always sung talaga. Like my life, it revolves around music so yung fact na nabigyan ako ng album, this is my first album, it’s really a big thing for me.

Her new album also gave the teen actress-singer the opportunity to work with her mom, a Miss Saigon alumna. Jenine also acted as Janella’s vocal coach.

“Like as usual naman kasi, since I was a kid, siya talaga yung tumutulong sa 'kin how to enhance my voice, mga techniques.

“Pero she gives me the freedom rin to do my own thing. So okay lang naman to work with my mom sa music.”

LOVE CAN WAIT. Janella’s original songs revolve around one topic: Love can wait.

How were the songs for the album chosen?

“It was actually composed by different people and two of them, 'Mahal Kita Pero' and 'Teka Muna Pag-ibig,' composed siya by Bobbie [Mabilog].

“And then I chose some of the other composers like sila Sir Jungee [Marcelo].

"They were actually asking me to write a song pero hindi ko pa magawa. So hopefully next time.”

Janella also did revivals of Donna Cruz's hits “I Can” and “Kapag Tumibok Ang Puso.” Both were used in Janella's defunct TV series Oh My G, and “Dear Heart.”

Janella answered, "I haven’t heard from her pero I was so happy noong sinabi sa akin na ire-revive ko yung 'Dear Heart' because they’ve been telling me about Sharon, her movies.

The teen singer was ecstatic when a representative of Star Music told her that Sharon liked her version of "Dear Heart."

“She liked it daw!” Janella exclaimed.

She also added that she wants to work with Donna, who is making a comeback in the recording scene.

The 17-year-old singer wants to be known for her own style, even if she's into revivals.

The album also contains minus one versions of the songs.