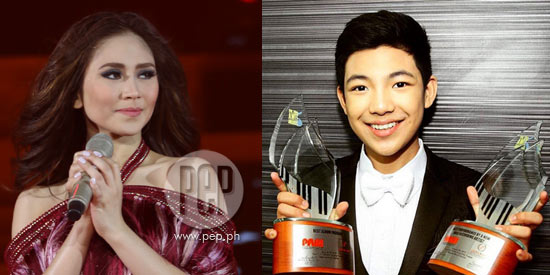 Sarah Geronimo, Yeng Constantino, and Darren Espanto were among the big winners during the 28th Awit Awards.

The awarding ceremony was held yesterday, December 9, at the Music Museum.

Popstar Princess Sarah earned the Album of the Year award for Perfectly Imperfect.

On the other hand, Yeng’s own compostion “Ikaw,” which was released in 2014, got the recognition for Song of the Year.

In his Instagram account, Darren posted his photo with the two trophies and provided this caption: "I would like to thank AWIT AWARDS for the 2 recognitions that I received tonight. Thank you also to MCA music, Starmagic and to all the songwriters and music producers who helped put this project together. To my family, friends and the DARRENatics, thank you so much! Most of all, to God, for the gift of music He has given me. To God be the glory!"

Spearheaded by the PARI (Philippine Association of the Record Industry, Inc.), this annual event "gives recognition to Filipino performing artists and people behind the making of Filipino recorded music."

Here is the full list of winners of the 28th Awit Awards:

Best Performance by a Female Recording Artist:
“Never Knew Love (Until I Met You),” Janice Javier

Music Video of the Year:
“Out of Control,” Pupil