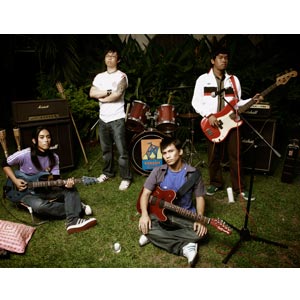 Health issue reportedly prompted Sponge Cola drummer Chris Cantada (standing, wearing glasses) to finally bid his band career goodbye. "Sadly, as you already know, Chris is leaving the band due to the worsening condition of his health. We have always made an effort to encourage the improvement of his condition but it recently became too difficult for him to keep up with our schedule," wrote guitarist Erwin Armovit in the band's official mailing list. Spo

In a recent message posted by lead guitarist, Erwin Armovit, in Sponge Cola's mailing list he cited Chris's fragile health as the reason behind the young drummer's decision to cut short his stint with the band.

"Hi guys! Sadly, as you already know, Chris is leaving the band due to the worsening condition of his health. We have always made an effort to encourage the improvement of his condition but it recently became too difficult for him to keep up with our schedule. While recording our previous album, TRANSIT, he already told us that he'd leave after finishing one more album. Our upcoming self-titled album is the last recording wherein Chris plays drums for Sponge Cola. We support his decision to part ways with us, but rest assured that there is no love lost between us, and that we will still keep the fire burning. Thank you all for supporting Sponge Cola and OPM."

According to someone who is close to the band, Chris found it hard to keep up with the typical late night schedule brought by gigs and shows. Shuffling band commitments with his day job in an advertising firm also proved to be a burden, prompting Chris to drop the band in favor of a more stable career.

SLOW DEPARTURE. Sponge Cola's upcoming eponymous third album under Universal Records is set for release on September 19 and will be launched on September 26 at Eastwood in Libis, Quezon City.

Chris's departure however will be done gradually as he will still be seen in the band's forthcoming videos and even on some TV appearances meant to promote the new record. Sponge Cola though will hire session drummers to fill in Chris's slot during live gigs.

Sponge Cola's acoustic live cover of the Madonna classic "Crazy For You" gained popularity among fans and casual listeners after it became an Internet download favorite.

Right after finishing college, the quartet immediately dished out their second record, Transit, under Universal Records in 2006 . The album found a more focused unit as proven by the strong radio singles like the anthemic "Bitiw," "Tuliro," and "Pasubali."