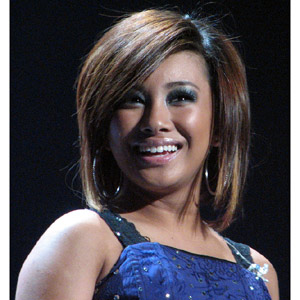 American Idol Season 7 Filipino-American finalist Ramiele Malubay is planning to go to her parents' hometown in Polilio, Quezon province when she arrives in the Philippines this December. She will perform with Ogie Alcasid and the Pinoy Idol finalists in The Idol Experience: Ogie Sings with the Idols at the Aliw Theater from December 20-21.


Filipinos avidly watched American Idol Season 7 to monitor the progress of the 20-year-old singer Ramiele Malubay. Being the seventh Fil-Am to enter the Top 24 of American Idol, she earned the support of her kababayans but she was cut from the competition last April 2008.


Ramiele was born in Saudi Arabia to Filipino parents but she grew up in Miramar, Florida. Her father is Roger Malubay, a native of Polilio, Quezon province, while her mother is Alicia Macrowon, who worked in Saudi Arabia. When Ramiele arrives in the Philippines on December 12, she plans to visit Polilio and be familiar with her father's hometown.


The AI finalist used to sing as the front act of performers such as Kuh Ledesma and Martin Nievera during American tours but this time, she will topbill the concert dubbed as The Idol Experience: Ogie Sings with the Idols.

The two-night concert will take place at the Aliw Theater in Pasay City on December 20 and 21. Three-time Aliw Awards' Entertainer of the Year and Hall of Famer Ogie Alcasid joins forces with Ramiele, alongside the first Pinoy Idol singing stars, and indie rock outfit Menaya in this groundbreaking concert.

How does Ogie feel about performing with American Idol finalist Ramiele? "I heard her recording and I think she is a very clean singer. Although R&B ang genre niya, magaling siya sa mga pop ballads, which is very Pinoy na Pinoy. I'm excited to meet her."

This is the first time that a concert will feature one of the country's pop icons together with the different singing champions. The concert will also serve as Ramiele's homecoming, and a reunion for Pinoy Idol winner Gretchen Espina and the 11 finalists. The producers are also in the process of finalizing the details so that AI Season 7 finalist Danny Noriega will be able to join Ramiele when she arrives here for the concert.


Ogie Sings with the Idols is being produced by a new production company called TheUnderGround Studio, Inc (TUGS) under the supervision of Brian Sombero, vocalist/ guitarist of Menaya. The idea of bringing together the Pinoy and American Idols came about when Brian noticed that a lot of Filipino-Americans around the world are hurdling through tough auditions, and making it to the top slots.


The concept of the concert only materialized when GMA-7 got the franchise for Pinoy Idol. As the show was simultaneously running with American Idol, another Filipino-American in the guise of Ramiele managed to reach top nine in its seventh season. "Ramiele's father is a close friend of my dad," Brian explains. "I asked him to accompany me to Miami, Florida to discuss and formalize the plan with Ramiele's dad. And since Ogie is a certified idol himself and a good friend of ours, I thought of putting all of them together in one show dubbed as The Idol Experience."


The concert's repertoire will revolve around a uniting theme but Brian refuses to reveal what the audience would be treated with at this point. With Marc Lopez as the musical director and Rowell Santiago as the overall director, it is enough to say that there will be several highly entertaining and innovative musical arrangements customized for the depth and range of the performers.