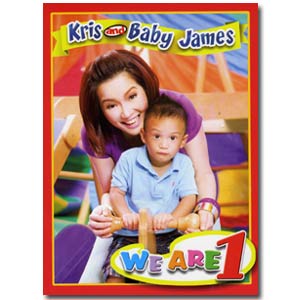 We are 1 features the mother and son tandem of Kris Aquino and Baby James. This two-disc musical, educational, and entertaining album contains mother and child bonding music suited for pregnant mothers as well as infants and toddlers.

Of all her many achievements particularly in the field of entertainment as an actress and game show host, Kris Aquino cited motherhood as the most challenging and rewarding role she ever took.

Aside, of course, from being a high-profile celebrity, the public knows Kris as a mother to her two sons, Josh and Baby James. In fact, some showbiz insiders credit the presence of Josh and Baby James in her life as the main reason why Kris mellowed down in terms of getting herself involved in controversies and other showbiz related issues.

"My children are an infinite source of inspiration to be a good mom and a good wife to help insure that our family stays united. They keep me humble, because to them I'm really just Mama. They keep me joyful, because no trial will ever seem unbeatable because unwittingly they are my life coaches and my cheerleaders," Kris wrote in the inlay sleeve of her latest Star Records album titled We are 1.

EDU-TAINING ALBUM. For her latest project, Kris teamed up with Baby James to offer We are 1—a two-disc edu-taining album conceptualized as a mother-child bonding musical, educational and entertaining record.

"The album was offered to me when he [Baby James] was just six months old. Pero I was scared kasi parang hindi pa kami sure kung ano yong mga kakayanin naming dalawa gawin and I felt that it was best for us to wait na magtu-two na siya para alam naming dalawa talaga kung ano yong mga developmental stages that we went through," Kris told the entertainment press at the launching held last June 5 at ABS-CBN's 9501 restaurant in Quezon City.

We are 1 goes beyond teachingthe alphabet as well as enumerating numbers, shapes and colors. It incorporates the act of praying and instilling family values towards growth and child development. Being a mom herself, Kris offers her thoughts and some step by step guide to mothers in caring for their child.

Studies show that music, particularly classical ones, aid in the development of a child while still inside the womb.

The producers note that, "Research studies have shown that learning through voice and music is an effective interactive medium for child's maximum brain development. Each musical piece in this album is crafted to make infants and toddlers smart and sound."

The second disc has the songs "Thank God I Found You" performed by Piolo Pascual, "You are the Love of my Life" performed by Gary Valenciano, as well as "Angel of God" and "Prayer" by Zaijian Jaranilla. It also contains voice recordings of Kris wherein she shares her thoughts about celebrations, loving and raising a family as well as the power of prayer.