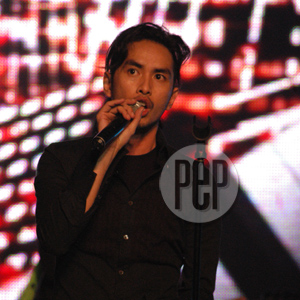 Rico Blanco of Rivermaya performed during the 2nd MYX Music Awards last March 15 at the AFP Theater in Camp Aguinaldo. Rivermaya's single "Isang Bandila" was nominated for the category Favorite Media Soundtrack, since it was used in ABS-CBN's current affairs program Bandila. However, the MYX Music award was given to True Faith for the song "Dahil Ikaw," which was used in the ABS-CBN telenovela Sa Piling

"So here it is, our first full-length studio album that contains mostly compositions from outside the band, but from within our hearts," says Rico Blanco of Rivermaya about their album titled Isang Ugat, Isang Dugo. "It's a project that has so far been one of the most exciting, humbling and fulfilling we have undertaken. We didn't deliberate about what we'd eventually accomplish. We were just fans rocking out to our favorite songs."

This album celebrates what many say was the golden age of Pinoy Rock and features some of the most precious Pinoy alternative gems from Mally Andres, Joey Ayala, Bobby Balingit, Ronniel Francisco, Binky Lampano, Leni Llapitan, RJ Oca, Chickoy Pura and Rhany Torres. It's a collection of stunning songs—from a time when Rivermaya itself "was just discovering the power of creating music, from artists that made us dream to start our own band," explains Rico.

"The idea started a couple of years back when my Dean's December "Chemical Wedding" album was becoming totally worn out from nearly two decades of abuse in my cassette player," confides Rico on how the album got started. "So Mark, Japs, Mike, and I thought it would be a good idea for us to re-record the whole thing, just copying everything note for note. We weren't going to release it, we just wanted to do it for ourselves."

On how the songs were chosen, Rico says: " We wanted to do even more tracks from that period, but ran out of time. Besides, the sheer volume of great work that flourished then makes it impossible for any one band, much less one album, to cover everything."

Featured on the Isang Ugat, Isang Dugo album are the songs "Golden Boy" by Ethnic Faces, "Things Are Getting Complicated" and "Healing" by Dean's December, "Tupperware Party" and "Never The Bright Lights" by Violent Playground, "Ilog" and "Padayon" by Joey Ayala, "My Sanctuary" and "Sumigaw, Umawit Ka" by Identity Crisis, "Things Within" by Silos, "Romantic Kill" by The Jerks, and "Inosente Lang Ang Nagtataka" by the Wuds, as well as the anthemic "Isang Bandila" created by Rico Blanco and Rivermaya.