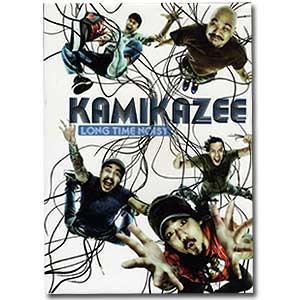 Kamikazee, the band responsible for the hits "Chiksilog" and "Narda" are back with album number three, Long Time Noisy. The 20-track album, released by Universal Records, continues the band's tradition of dishing out heavy rock-pop songs laced with witty lyrics.


Kamikazee frontman Jay Contreras is not bothered by the fact that his band has only released three studio albums for the past nine years that they have been together.

STOPS, MISSES AND HITS. Writing and arranging songs to fill up an entire record is never easy. But personal responsibilities somewhat hindered the band from immediately releasing a follow up to the double-platinum selling Maharot took a long time to hit the shelves.

Yes! Despite the band's image as an irreverent and humorous bunch, the quintet of Jay, Jomal Linao, Led Zeppelin Tuyay, Jason "Puto" Astete and Allan "Bords" Burdeos are all responsible family men with normal joys and concerns outside the confines of the cliché rock n' roll lifestyle. The recent drug-related controversy faced by Tuyay in Dubai also forced the band to temporarily hold off studio time.

With the completion and release of Kamikazee's new album titled Long Time Noisy,the band is once again back in top form to reclaim their place as one of the most sought after local bands both in the recording scene and live circuit.

The three-year gap turned out to be beneficial especially to the fans as the band were able to produce more than enough songs, making the much-anticipated record a worthy buy.

The album also contains a cover of Francis Magalona's energetic number, "Meron Akong Ano." Francis was supposed to join the band in recording the song but he unfortunately succumbed to leukemia weeks before the session.