The Dawn welcomes new member into its fold 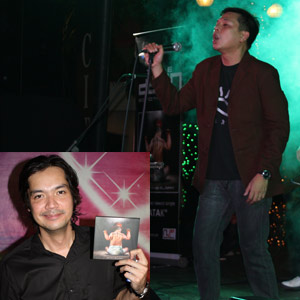 Rock legend The Dawn launched their newest album titled Sound the Alarm last Friday, September 11, at Eastwood Central Plaza, much to the delight of welcoming fans eager to hear fresh tunes from the veteran musicians.

It has been nearly five years since the group released an album featuring all-new material. Their last collection, Harapin, was launched back in 2004 and popularized singles such as "Tulad ng Dati" and "Laging Narito."

This year, vocalist Jett Pangan, drummer Jun Boy Leonor and bassist Buddy Zabala are back in the spotlight along with a fresh face and name to grace the group's member line-up. In light of the recent exit of ex-guitarist Francis Reyes, The Dawn has since added Kenneth Ilagan (formerly from True Faith) as the group's new guitarist, creating fresh rock infusions to satiate the musical cravings of their fans.

Sound the Alarm is a 10-track album that offers all-new material written and composed by the members themselves.


SOUND THE ALARM. With newest single, "Hatak," the band kicked off their performance amidst smoke machines and cheers from the audience. After short introductions of themselves, the band then played "Tulad ng Dati," followed by three tracks from the album: "As I Do," "Avenida" and title track "Sound the Alarm" as well as a couple of The Dawn classics, "Iisang Bangka Tayo and Tuloy-tuloy."

In an interview preceding the performance, vocalist Jett Pangan described their music off the new album as "still very much The Dawn." He told PEP (Philippine Entertainment Portal), "It's still loud, it's still rock, it's still melodic, but it's an infusion of different styles from Buddy and our new member, Kenneth."

The 41-year old vocalist also believed that the musical genius contributed by one of their newer members, Buddy Zabala (who joined the group as bassist in 2005 after leaving The Eraserheads), has made this album quite different from their past records. "That alone brings in something different already," he explained.

In the same interview, Jett narrated how they came up with Sound the Alarm and attributed their four-year hiatus to their busy schedules, among others. The singer told PEP, "We were busy, we had a change in members, until one day we just decided, 'Let's sit down, make an album and finish it.'"

When asked whether they plan to do the same promotional activities for Sound the Alarm as with Tulad ng Dati (which was made into a film and won Best Sound, Best Editing, and Best Picture in the 2006 Cinemalaya), Jett Pangan answered with a firm NO. He explained, "We just want this album out, we just wanna be a band again, and just promote an album the way bands do. Just do it light."

MEET KENNETH ILAGAN. The addition of Kenneth Ilagan on guitars has been an awesome ride so far, as attested by vocalist Jett Pangan. He shared, "It's more fun. Makulit kasi 'to, e," referring to their new guitarist. "So, masaya, magaan," he continued. "We're serious with making our music sound good everytime, but we also take time to laugh at each other, have a few beers, stuff like that."


Having been a guitarist for the band True Faith, Kenneth is no newbie onstage. PEP asked the guitarist about his humble beginnings with The Dawn, to which he replied, "Wala na ko sa True Faith for two months. Tapos si Alvin [one of the managers] called me up and told me na baka pwede mag-audition. Nag-audition ako for one month. I was a session player for them. After no'n, ayun na."


Having been a huge fan of The Dawn even before joining the group, he also narrated his initial interactions with the band, "Hindi nila ako kilala," he told PEP. "I [used to] always go up to them, introduce myself, [and] even though I was playing pa with other bands before, nagpapakilala ako, kasi I'm a fan 'e. Do'n nila ako nakilala. Slowly, 'pag nakakasabay ko sa gig, 'ayun."


MESSAGE TO FANS. The Dawn has been in the music industry for a very long time now, starting from the late ‘80s, and has since then attracted a number of followers. PEP asked the group about their message to budding artists who want to follow in their footsteps.


"Just love what you do," shared vocalist Jett Pangan. "You will only know what you wanna do in life, if you listen to what's inside your heart. It may sound cliché, but that's the truth," he explained. "Music as much as it's fun... it's very unstable, sometimes you're the richest man in the world, and next, you're like, where's the gig?"