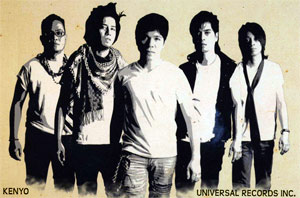 Neither does he care whether the public hears a similarity between the songs of his new band Kenyo and that of his former band.

"We have no issues on as how we sounded before as O n' L," a confident Mcoy told PEP (Philippine Entertainment Portal) at a recent interview held at Universal Records in Quezon City.

"With O n' L kasi I'm more of a wordsmith. I contribute more on the words and konting mga melodic lines kung may ideas ako. Right now with Kenyo, since I'm working by myself, sa songwriting aspect lahat, words and music I took charge na," he further expounded.

Not that it bothered Mcoy.

While Radiosurfing earned mixed reviews from critics, the band packed their bags and headed overseas for a series of gigs booked under the invitation of new converts excited over Kenyo's brand of music.

"We were there [U.S.] for a month and a half," recalled Mcoy. "Nakakatuwa ‘yon because of Radiosurfing, somebody from the States got a copy of the album and they were amazed with the concept of the album so they invited us over to play and it became a series of shows."

The U.S. shows along with the appreciative response drawn from the crowd bolstered the band's collective confidence. In fact, most of the songs found in Kenyo's new album, Maharlika, under Universal Records were written during the inspiring period.

"We actually previewed some of the new songs there," Mcoy said, his voice brimming with obvious pride.

"Hanggang sa Muli," the first single lifted from Maharlika, was written and arranged completely in the States.

According to the band, the 12-track album directly points to the direction Kenyo is heading.

"We'd like to think of this one as our first since this is the original one because the last album was a project record. This is a real Kenyo record because it's composed of all original tracks."

PLAYING THE OLD HITS. Criticisms and comparisons aside, Mcoy said he remains grateful to his past achievements while, at the same time, he's deadset on moving forward into the future.

"Hindi ko nga alam if I'm supposed to be glad or bothered with that. When Kenyo came out marami ring chunk of the old fans accepted us."

He continued: "Sa amin, kami ang feeling namin, we're starting over while doing whatever we want now without the limitations of our old band."

How about playing past O n' L hits?

"Yeah, you can't help it," Mcoy acknowledged. "If Bamboo is still playing some Rivermaya songs and Rico even sings songs na originally si Bamboo ang kumanta, why can't we sing Orange & Lemons songs? We still do. We still play the songs."