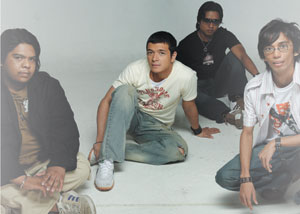 Jericho Rosales and Jeans
Jeans is the band fronted by actor Jericho Rosales which now explodes on to the music scene with the release of their debut Loose Fit under EMI Philippines. Rosales—who accomplishes a feat that he is both an actor and musician—excels in both fields. But even before the album's up-coming launch in the Philippines, the album had already been distributed in Kuala Lumpur as signed under EMI Malaysia.

Jericho's bandmates are Dan Serenado on guitars, Jude Manota on bass and Aaron Ace Manio on drums. The band's manager, Manila Genesis Entertainment and Management, encouraged Rosales to hire the services of award-winning producer Mon Espia to re-mix and tweak the album for Philippine release.

Jeans is everything the unique name implies. It has a very rugged but comfortable feel to it. Alongside with the album title, Loose Fit, the music gives you a not too loose, not too fit-not too jazz, not too rock package. The entire album is predominantly flavored with jazz, pop and rock with 14 tracks with ten songs in English and four songs in Tagalog.

"Ngayong Gabi" is a good example of just how talented songwriter Rosales is. The lyrics are poetic and metaphoric backed with commanding guitar riffs and drum lines, the entire sound is melancholic, in a literal sense. Dubbed as the album's first single, this song is now massively playing on local radio stations and aired with a music video directed by Topel Lee sponsored by Penshoppe.

All songs are penned by the actor himself as he shares his personal experiences of love and heartbreak through his compositions. Especially with a song made for and sung with his special friend, Heart Evangelista, "You're Beautiful."

Jeans signed with EMI Malaysia through Rosales's Malaysian friend, Kish Ram. Like any other bands do, Jeans went through the same process-they submitted a demo; just waited for a call, and went on to produce and record the album and do the promo. Jeans released their debut album in Malaysia (Kuala Lumpur) in March 2006 with "Panday" as first single-- the eponymous version of Jericho for the TV series he starred in. Jericho also directed the music video for "Coming Out," also one of tracks in the album. The release of the album was in line with major concerts that made the band popular in Malaysia.