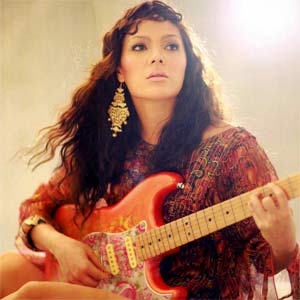 "It's funny because parang naging personal 'tong album na 'to. Siguro kasi sometimes when you let go and let others take control, it all works out better. So parang nag-bounce back 'yong energy and kumportable po ako doing this album," KC Concepcion said at the press launch of her 12-track album titled KC .

For one, KC sounded more confident this time on record. It was no secret that KC confessed feeling very nervous and conscious singing inside the studio when she was making her debut album. Credit perhaps should go to a.k.a Cassandra's "surprising" commercial and critical success on KC's sudden burst of confidence in her skills as a recording artist.

KC portrayed the first album as "experimental," a product composed of cover tunes conceptualized by the label as a launch vehicle for them to test the waters. The second album, according to KC, is more "personal," with her earning the title of songwriter and co-producer.

Songwriters who contributed original materials to the album were Jaye Muller and Ben Patton ("Not Like The Movies" and "After The End"); Allan Tongco ("Di Bale Na"); Louie Ocampo and Jingle Buena ("It's Been A While"); Rye Sarmiento ("Tayo Na"); Jude Gitamondoc ("Breathe You"); Nina Ossoff, Dana Calitri, and Kathy Sommer ("Girl Most Likely To"), Pearlsha "Isha" Abubakar ("Naaantig Ako Sa 'Yo"), Jimmy Bondoc ("Hulog").

NO PRETENSIONS. KC proudly announced that she contributed three songs in the album: "Magandang Umaga," "Takip Silim," and "Worth the Wait."

The inclusion of her own written materials made the album indeed a personal undertaking for the actress-model-singer and philanthropist. Utilizing downtime from long shooting days provided KC enough energy and time to write down her thoughts on paper reminiscent of her days back in France.

Even the album's layout and design reflects KC's personality. Complementing the journal-like packaging are the bohemian-inspired photos of the singer-actress.

"I guess boho [short for bohemian] lang talaga ako," she said with a smile. "But more than anything ang nire-represent lang naman talaga nung look ng album is 'yong may puso, free-flowing. But yeah, I was very comfortable doing the shoot kasi it captures the idea behind the album na no pretensions and very honest."

Well-known photographer and KC's close friend, Mark Nicdao, was commissioned by the label to take the images that were used in the final layout.

The first single lifted from the album is "Not Like The Movies." Its video is currently being played on MYX while the single itself currently enjoys heavy rotation on the airwaves.

Song Music and KC are said to be planning to embark on a mall tour this month until May to further promote the 12-track album.