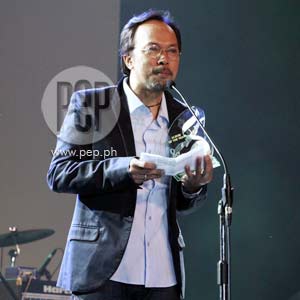 Folk singer-songwriter Noel Cabangon took home the Album of the Year trophy for his record, Byahe, in the 23rd Awit Awards staged last September 30. He expressed surprise that a folk artist like him would win the award.

The Philippine Association of the Record Industry (PARI) honored OPM (Original Pilipino Music) standouts for year 2009 with the staging of the 23rd Awit Awards, held last September 30 at Centerstage, SM Mall of Asia in Pasay City.

This year's installment of the annual prestigious local music event carried the theme of a live concert—significantly reducing the time allotted on nominee presentations and sidelights commonly seen on awards night.

Singer-songwriter Yeng Constantino and 6cyclemind drummer Tutti Caringal of ABS-CBN's late-night show Music Uplate Live served as lead hosts for the second part of the program together with singer-actress Karylle.

Cabangon's most notable award for the night, however, was the Album of the Year for his 15-track album aptly titled Byahe. While the album's cover and inlay photos were taken during the singer-songwriter's visit to Denmark, the songs are certified local gems, like "Ipagpatawad Mo," Tuloy Pa Rin," and "Di Na Natuto," among others.

Controversial host Willie Revillame pulled off a surprise after his Ikaw Na Nga album was chosen as the Best Selling Album of the Year.

Fast-rising band Franco's single "Castaway" was named Best Performance by a Group Recording Artist, while the soulful Kat Agarrado and the rest of Sinosikat? clinched the Best Jazz Recording trophy for their funky remake of "Mr. Musikero."

The most impressive performance of the evening was delivered by a collection of artists: Yael Yuzon, Sabrina, Top Suzara, Aiza Seguerra, Noelle Cassandra, Princess, and Toto Sorioso.

All singers and performers took turns in performing past Song of the Year winners like "Yugto," "Rainbow," "Forever," "Kailan," "Narda," "Kailangan Ko'y Ikaw," and "Hallelujah."

Gloc 9—who dedicated his Song of the Year trophy to the late Francis Magalona—ended the program with the now award-winning single, "Upuan."

PARI officials mentioned that they want the Awit Awards to be seen as a big musical annual event that aims to help promote local music further, especially now that veteran and young artists are uniting for the good of OPM. The international success of Filipino artists is also a positive sign for better days ahead, regardless of the continuing problems imposed by piracy and rampant illegal Internet downloading.

Here is the list of all the winners under the different categories:

Song Title: "Hiding Inside Myself"

Best Performance by a Child / Children

Album of the Year

Best Selling Album of the Year

Song of the Year

Song Title: "You Know It's Christmas"

Music Video of the Year