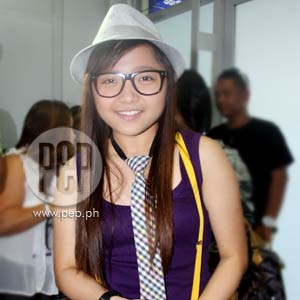 "Nagre-record ako ngayon for my second album and we'll be featuring young songwriters," says Charice about her upcoming album.

If her life story would be made into a movie, whom would she pick to play Charice? "Noong bata po ako, dream ko po talaga na ang gumanap sa akin, si Dindin Llanera (a child singer who was discovered in the 'Little Miss Philippines' portion of Eat Bulaga!)," she said.

This Sunday, February 13, the international singer's long-overdue TV special titled Charice: Home for Valentine's will air at 8:30 p.m. on GMA-7.

FITNESS ROUTINE. When asked why she has a much slimmer figure these days, Charice said she was advised to undergo a fitness routine in preparation for her solo concert series in Japan.

In the same month, Charice's album reached Gold Record status in Japan after being out in the market for three months. The album contains the single "Crescent Moon," an English rendition of the hit Nihongo song "Mikazuki" by popular Japanese pop singer Ayaka.

Here is the schedule of Charice's solo concerts in Japan this year: