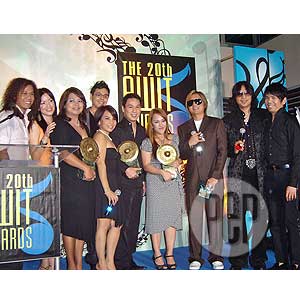 The singing group The Company was one of the recipients of the minor awards given out during the July 19 press conference for the upcoming 20th Awit Awards. The rest of the winners will be announced during the awards night scheduled for August 8 at the NBC Tent.

Thirty categories comprise this year's Awit Awards, which will be held on August 8 at the NBC Tent, The Fort, Global City. Winners of the minor categories in the 20th Awit Awards were announced at a presscon held last Thursday, July 19.

The Company bagged two out of the eight awards given out during the pre-awarding ceremony that took place at the Top of the Citi Restaurant in Citibank Towers, Makati City.

The singing group won Best Christmas song for their composition "Noche Buena," which was released by Viva Records. Meanwhile, Moy Ortiz of The Company bagged the Best Vocal Arrangement award for the song "The (Not So) Little Drummer Boy."

Pinoy Dream Academy scholar Jay-R Siaboc won his first Awit Award for his song "Hilot," which was named the Best Regional Song. Sugarfree's album Talaarawan, which was created by Inksurge.com, was chosen among the five nominees for the Best Album Package Award. Both Jay-R and members of Sugarfree were unable to attend the pre-awarding ceremony.

Mr. Pure Energy Gary Valenciano received the Best Dance Award for "Shake It Off" under Universal Records. The same song was nominated for Best Inspirational Song but it was Mon David's "I Had a Dream" that was chosen for the said category.

Other winners announced that night include: Ryan Cayabyab for Best Musical Arrangement for the song "Madaling Araw," also under Viva Records Corporation; as well as Ferdie Marquez and Efren San Pedro for Best Engineering Recording for the song "I Do," under Warner Music Philippines.

NOMINEES FOR MAJOR AWARDS. The Awit Awards is an award-giving body that gives recognition to local musical talents organized by the Philippine Association of the Record Industry, Inc. (PARI). All entries chosen were released in the Philippine market from 01 January 2006 to December 31, 2006.

There are three broad categories under which the awards are classified: Performance Awards—presented to artists who have exemplified exceptional interpretation of song pieces from various musical genres; Creativity Awards—presented to music visionaries, forerunners, and song architects who contributed to the overall excellence in the music industry and the market; and Technical Achievement Awards—presented to individuals who enhance and craft musical pieces to perfection.

Leading this year's number of nominations is Gary V. with eight nods, followed by the bands Kamikazee and Sponge Cola, with seven and five.

Gary V. is nominated twice in the Best Performance by a Male Recording Artist category for the songs "Manila" and "In Another Lifetime," while his album Gary V. Relevance (produced by Universal Records) is one of the choices for Album of the Year Award. He is also in the running for the Best R&B Song for "Sana Bukas," Best Ballad for "In Another Lifetime," and Best Vocal Arrangement for "You Are."

This year's Awit Awards may also be the year for the Pinoy rock bands such as Kamikazee and Spongecola. The five-man Kamikazee was nominated for Best Performance by a Group, Album of the Year, Song of the Year, Best Rock, Song for TV/Movie, and Best Music Video.

Asia's Songbird Regine Velasquez leads a pack of artists with four nominations. The others are bossa nova star Siti, ex-Company member-turned-soloist Reuben Laurente, and band Kala, which got nominated for Best Performance by a Group for the single "Jeepney."

The major winners for this year's Awit Awards will be named during the actual awarding ceremony on August 8, 7 p.m. at the NBC Tent, The Fort, Global City.

The awards night, which will be hosted by Toni Gonzaga and Mo Twister, will gather some of the country's best musical talents in one venue for spectacular production numbers. Some of the guest artists who will perform are Gary Valenciano, Gabriel Valenciano, Paolo Valenciano, The Company, Sitti, Kamikazee, Rachelle Ann Go, Barbie Almalbis, Nina, Kyla, Raymond Lauchengco, Parokya ni Edgar, Itchyworms, Sandwich, Jed Madela, Francis Magalona and many more.