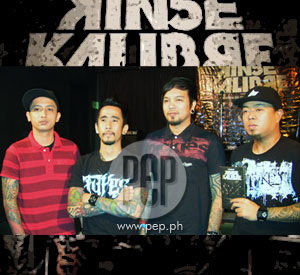 Kinse Kalibre, Slapshock's new album under Polyeast Records, is out in the market in time for the band's 15th anniversary in the music industry.

The 12-track album, featuring the first single "Ngayon Na," comes after the commercial success of their last album Cariño Brutal, which was released in 2009.

The band, composed of Jamir Garcia on vocals, Lee Nadela on bass, Lean Ansing on guitars and Chi Evora on drums were asked, after 15 years, what is Slapshock's caliber now?

Jamir replied, "Well, I guess, we can honestly, walk on every show na we know na nakacontribute naman kami sa music industry for the past 15 years,

The band started in 1997 and is showing no signs of slowing down at this point.

The band has remained true to their style despite many other bands from their generation experimenting on other genre, particularly pop music, just to achieve greater commercial success.

The band also keeps away from the limelight when it has nothing to do with their music.

"For the past 15 years, you hear us. Pero, I'm pretty sure you don't know everything about us. Parang ganun,

"You're still mystified, meron pa ring mystery na beyond sa Slapshock [you don't know anything about us]. You hear about us, through music lang," Jamir expounded.

IN BETWEEN. Their last album was widely-acclaimed by many listeners and was played on air even by popular radio stations. Is mainstream popularity a measure of success or do they shy away from that?

Lee Nadela answered that they are in a good position in between.

They enjoy being in a position where they do not compromise their taste in music and yet, still have many loyal listeners and followers.

If they had their way, would they rather be popular or still have a niche as listeners? Lee was quick to answer.

But at the same time, they cannot dismiss potential followers.

Jamir affirms that constancy has been the name of the game for them.

"We have the same group, same member, same sponsors, same label for the past 15 years.

The band has opted to keep it steady by declining offers that, for them, goes beyond their call of duty. They did not want to be commercialized.

So far, this formula has apparently worked for them.

RESPECT. They've been together for 15 years, how do they check their egos?

They also make sure that in terms of decision-making, it is always a majority decision.

They also show their respect by not being involved in other bands, even without an outright agreement.

EVOLUTION. Has their music evolved over the past 15 years?

Jamir shared that he came across people who were in highschool when they first followed the band.

To further exemplify how long ago15 years was, in some gigs they played, children were only at two or three years old when, as Jamir recalled, he wrote Agent Orange, one of their trademark singles.

Their frontman also recalled how he could only think of writing songs with a lot of cuss words back then.

They even refused an offer to endorse a brand of tobacco, which, according to them, they would have accepted when they were younger.