James Ingram returns to the Philippines for a two-night concert; expresses sadness for Whitney Houston's passing 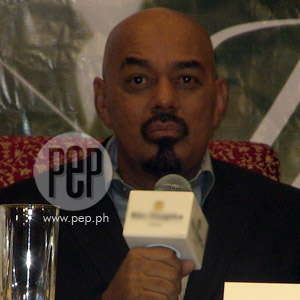 James Ingram is in the Philippines for a two-night concert at the Smart Araneta Coliseum on February 17, Friday, and at the Waterfront Hotel in Cebu on February 18, Saturday.

R&B legend James Ingram has returned to the Philippines after more than a decade. He is in the country for a two-night concert at the Smart Araneta Coliseum on February 17, Friday, and at the Waterfront Hotel in Cebu on February 18, Saturday.

After resting since his arrival on Tuesday night, February 14, concert-producer Joed Serrano held a presscon for him the next day, February 15, at the Edsa Shangri-La Hotel in Pasig City.

Jolly James entered the function room belting his signature baritone howl heard in most of his songs.

The Grammy-award winning artist, who has performed in the country numerous times, sat on the presidential table, greeted the press in attendance, and expressed his joy on being back to the Philippines.

"Every time I come here, I'm so... you know, y'all have welcome me, and make me feel like a Filipino," enthused the 59-year-old singer.

"That's how I'm treated and I love it. Because, I don't get that kind of thing...

"You know, people like my music around the world and stuff, but, I've never been confident like this, in terms of coming to the Philippines. Y'all make me feel like I'm one of you," he continued.

JAMES'S CLASSIC SONGS. Ingram's last solo album Stand (In The Light) was released in 2008. Lately he has been doing collaborations with other artists and is more focused on touring now than doing an album.

But despite his semi-retired status in studio-work, Ingram remains in the consciousness of every music fan through his songs.

His classics like "Just Once," "There's No Easy Way," and "Whatever We Imagine" are still played in radio stations. These, and his other songs, remain staples in social gatherings and parties, especially during karaoke time.

His concert guest Lea Salonga remembered how she was wooed by her suitors back in her teenage years with mixed tapes that include James's songs.

JAMES'S FAVORITE SONG. But among James's enduring hit songs, James admits "Just Once" is his favorite.

He said he is forever indebted to the song that started it all for him.

"It is not the song, [but] THE song that started my career," the R&B legend said.

"You see, I was not a singer. I was a musician. I was playing keyboards in a [town] called Akron..."

According to blackamericanweb.com, Ingram used to be in a band in Akron, Ohio, called Revolution Funk. Although he can play several instruments, his vocal talent outshined the rest.

When he moved to L.A., he became a session musician and a "demo record singer."

"To make the long story short, I was writing with this guy, and I can sing better than him to do a demo."

James revealed that he was paid 50 dollars and a copy of the demo recording of the song he sang. This became an additional source of income for him aside from his being one of the sought-after session musicians in L.A. during those days.

Until he did a demo of a song by Cynthia Weil and Barry Mann. The demo reached the ears of well-known record producer, arranger and trumpet player Quincy Jones.

Jones loved his voice, contacted him and hired him to sing "Just Once" in his 1981 album The Dude.

"I thought it was a joke. But that's what started my career," recalled Ingram.

Aside from "Just Once," James will be singing his other hit songs like "One Hundred Ways," "I Don't Have A Heart," and "Yah Mo Be There" in a two-night concert at the Smart Araneta Coliseum on February 17, Friday, and at the Waterfront Hotel in Cebu on February 18, Saturday.

WHITNEY HOUSTON. During the presscon, the singer was also asked about the recent passing of his fellow R&B singer Whitney Houston.

Houston was found dead submerged on her bathtub in her Beverly Hilton Hotel in California, last Saturday, February 11. Her cause of death, as of this writing, is still unknown.

Although they have never done a recording, James said he and Whitney have shared shows together.

Saddened by what happened to a great singer such as Whitney, James stressed the importance of one's spirituality.

"You know, you can have great hits in life and stuff, know what I'm sayin'?

"But if you don't have a spiritual background to keep you on goin' too far, you know, you can end up anywhere."