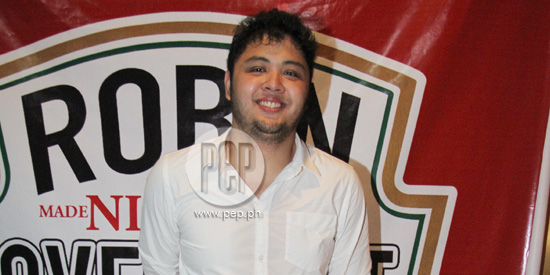 "I've been working on this for so long," pahayag ni Robin.

"I'm just happy, you know the feeling of you've been doing something for a long time and you don't finish it, and then you finish it? That's how it feels.

"Parang it's finally done, it signals me that I'm starting to work very soon. I was like, 'we're done, we've done the launch,' I'm waiting for the next step."

"My parents are Martin and Pops, I know that and it gets me a lot of doors opened," pag-amin ng binata.

Kuwento niya, "PolyEast is curious enough with my 10 original songs.

"Zia [Quizon] came up before me and she had a lot of original songs, and they picked out one original song from the hundreds that she had written.

"So, I consider myself lucky that I got what I wanted, you know, that there's no big argument about, 'can I have 10 songs?' there's no debate about it, they said, 'we can try it.'

"So I'm just happy that all the songs are in my album."

"I can see how it looks like that, but more like they are inspired by the musicians in their time. So, Kenny Logins, Toto, Michael Jackson, that's my dad, Frank Sinatra.

"Well, they're still cool now it's just that I listen to a lot of different kinds of music, that's why my music came out like this.

"Then few weeks later we meet again and they said, 'let's add 4 more,' and I said, 'I still have songs,' and I recorded it, and they managed to decided, 'let's try 10 songs.'

"So, I'm hoping it goes well because it's been a long time since OPM sold an all original album."

"You know there are love songs, there are feel good songs.

"I just wanted it to be more like, Filipinos keep saying, 'let's bring OPM back,' and I just want to show people that OPM doesn't have to sound like the typical OPM songs, it can be a different music.

"Some musicians in the album, I wrote a part, but some of them helped me in writing the songs, and they're all young.

"So, not all the songs are written just by me, you know. There was a lot of help from different kinds of people.

"So, the songs are all OPM, but they don't sound regular OPM, I just want to show people that.

"If people buy this album, other countries will see that we're great singers, we're great musicians, and can make great songs."